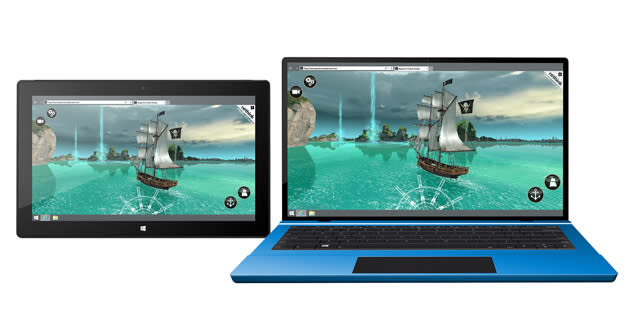 Here's the thing about Assassins Creed: Pirates (you know, aside from the obvious swashbuckling theme): It was made specifically for phones and tablets. In fact, Ubisoft warned from the get-go that we probably wouldn't see a PC or console version. Starting today, though, you can play it on your computer after all -- well, sort of. Ubisoft just released a free browser-based version allowing you to play in the browser, using either touch input or a mouse and keyboard. What's nice, too, is that although Ubisoft developed the web game with Microsoft, it actually works with every major browser -- Chrome, Firefox, Opera, Safari and, of course, IE. As a bonus, it runs full-screen, something most web-based titles can't do.

There are a couple catches, though, starting with the very nature of the game. Though Assassins Creed: Pirates is indeed a shoot-em-up title in its original form, the web version is a simple racing game (not that there's anything wrong with that), where you challenge your friends to see who can steer the ship the fastest. From the settings menu, always a click away in the upper-left corner, you can change the weather conditions on the fly in case you get bored with racing in calm waters. Speaking of, this might be a good time to underline another Microsoft connection: the game makes use of Babylon.JS, an open-source 3D engine based on WebGL, JavaScript and TypeScript that was developed by four developer evangelists at the company.

The second catch: the game only works on desktop browsers, which means unless you're using a Windows tablet with IE installed, you're out of luck; it won't work on the mobile version of Safari, for instance. (Moral of the story: get a Surface.) Assuming you've got a Windows tablet or a computer of any sort, the game is live now, with support for five languages and three difficulty levels. Check it out!

In this article: Assassins-Creed, AssassinsCreed, assassinscreedpirates, microsoft
All products recommended by Engadget are selected by our editorial team, independent of our parent company. Some of our stories include affiliate links. If you buy something through one of these links, we may earn an affiliate commission.