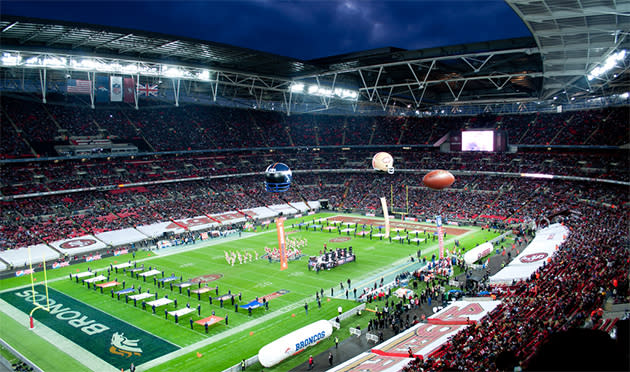 AT&T and DirecTV ruined an idyllic Sunday afternoon with the news of a multi-billion dollar acquisition, and -- surprise, surprise -- people haven't stopped talking about it yet. That's at least partially because of an interesting break-up clause the two parties have worked out: AT&T can wash its hands of the acquisition if DirecTV somehow fails to lock up the rights to offer NFL Sunday Ticket for another few years.

Not a pigskin aficionado? Sunday Ticket gives subscribers access to the full spate of NFL games that aren't run by their local television affiliates in exchange for about $39 a month (you can pay a little extra for mobile access, natch). At last count, something like 2 million of DirecTV's 20 million customers shell out for all that gridiron glory -- assuming they all pay for the top-tier plan (which most definitely isn't the case), some back-of-the-napkin math reveals that DirectTV can rake in as much as $1.32 billion from those customers each year. Locking up the rights to offer those football games cost DirecTV a whopping $4 billion over the past 4 years so straight-up profit isn't quite as impressive, but it's little wonder AT&T is so interested. If we're being honest, the odds of DirecTV mucking things its NFL deal are pretty slim, but it's still interesting to see what (if anything) could throw up roadblocks as these two giants pull each other closer.

In this article: acquisition, att, directv, hdpostcross, nfl, sundayticket
All products recommended by Engadget are selected by our editorial team, independent of our parent company. Some of our stories include affiliate links. If you buy something through one of these links, we may earn an affiliate commission.