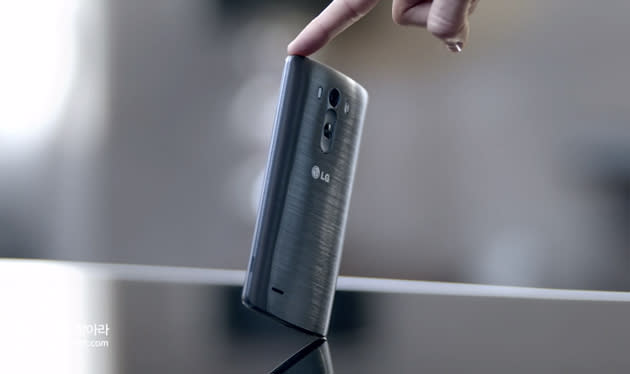 LG's G3 launch event is almost upon us, and the hype train is continuing to build momentum courtesy of a new, official teaser site. The highlight of this single page is three short clips that focus on what'll undoubtedly be some of the G3's biggest selling points. Yesterday, LG showed of its QuickCircle case for the handset, and now it's given us the first formal glance at the G3's design. The layout is no surprise, given we've seen leaked photos of the handset, but we're still left wondering whether brushed metal or a plastic imitation will be the main chassis material. The Quad HD display that's kinda old news is mentioned in another clip, while the camera is the focus of attention in the final video. Unfortunately, we don't speak Korean, but allegedly it confirms previous whispers of a laser-assisted focusing system, or heavily alludes to such a feature at any rate. Only the weekend (alright, and Monday) stands between us, the truth, and perhaps yet more proof that everything is better with lasers.

In this article: g3, lg, lgg3, mobilepostcross, teaser, video
All products recommended by Engadget are selected by our editorial team, independent of our parent company. Some of our stories include affiliate links. If you buy something through one of these links, we may earn an affiliate commission.