Latest in A million ways to die in the west 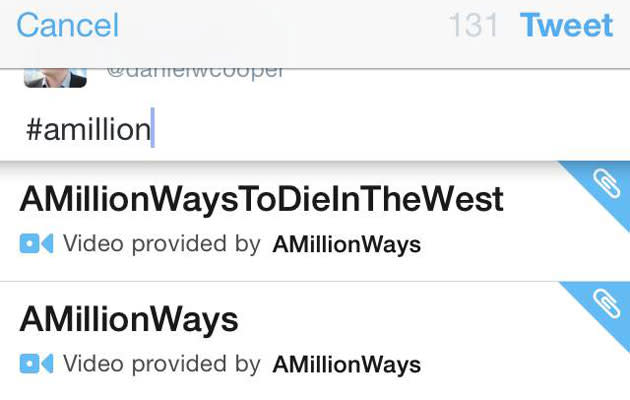 Twitter's been working on numerous ways to marry tweets and video, and it looks like Seth MacFarlane has inspired them to try another. If you type the hashtags #AMillionWays or #AMillionWaysToDieInTheWest into the iOS client, you'll be able to embed the red-band (adults only, folks) trailer for the movie into your tweet. We've tried to replicate the feature on the Android app to no avail, and when Re/code asked Twitter for an official line, all it said was that it was one of its numerous experiments. Perhaps in the future we'll all be able to embed longer video into our 140-character missives, or maybe this'll be reserved just for those impoverished movie studios with tickets to sell.

In this article: A Million Ways To Die In The West, Embed, Promoted Video, Twitter, Video
All products recommended by Engadget are selected by our editorial team, independent of our parent company. Some of our stories include affiliate links. If you buy something through one of these links, we may earn an affiliate commission.