You can now ask Cortana to check your Outlook email 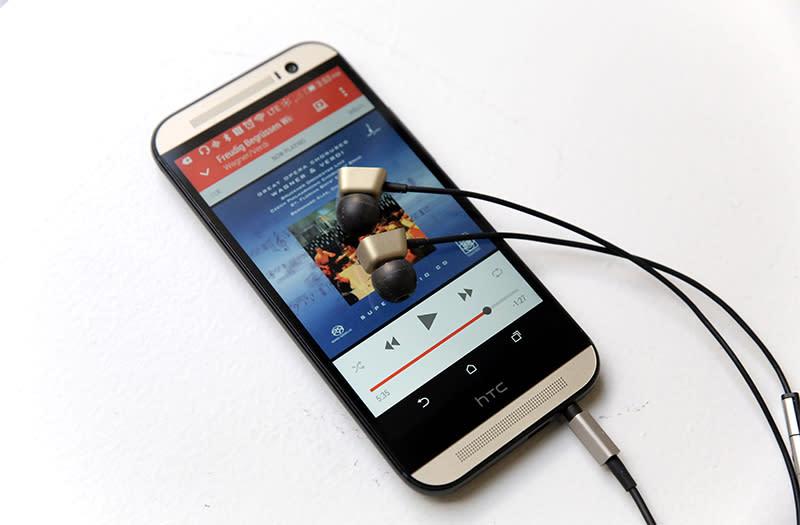 When HTC CEO Peter Chou first confirmed the existence of the Harman Kardon edition One M8 at a small press event in New York City, I leaned over to a reporter friend sitting next to me and mouthed a few choice expletives. Wasn't this Sprint event supposed to be about Spotify? And HD Voice? Where the hell was this coming from? After a few weeks of using the thing, I'm still not entirely sure why this needs to exist... but I'm sort of glad it does.

Let's back up for a moment first: What's new about the Harman Kardon edition One? It's nearly identical to the version we reviewed back in March, albeit with a few twists. There's the kinda, sorta fetching black-and-champagne trim, for one. It may just be my finicky fingertips, but I can't shake the notion that the Harman Kardon One's black finish feels just a little smoother than the gunmetal gray that graces nearly ever other M8 floating around out there. The cosmetics are just a distraction, though -- this One's apparent raison d'être is to knock the socks off audio buffs who just can't deal with lousy, compressed mobile music quality.

I'll admit it: I was a skeptic at first. BoomSound did wonders for the original HTC One, but could the company capture some of the same lightning in a new bottle? Further testing revealed that yes, this One's once-exclusive sound software really does make a difference... even if it's not always what you were hoping for. The Harman Kardon One's musical might shines through thanks to two features you can toggle in the settings. Clari-Fi aims to lift your compressed audio tracks out of the mud, injecting additional oomph and dimension to the gems in your collection. It generally does a good job of it too: The feature manages to help my slew of MP3s sound brighter, more vivid and more alive. Clari-Fi seems to work mostly on mids and highs, so vocals seem crisper and rhythm sections seem bouncier and more percussive... even though thrumming basslines tend to get de-powered a hair. I did notice a dramatic difference as I worked through a spate of low bitrate mp3s, but the effect became more subtle once I started working with higher-quality examples. I'll be the first to admit that my ears have taken a drubbing from years of loud Japanese rock, so it's very possible you'd pick up on more nuanced shifts than I did -- that said, Clari-Fi does make a difference. While we're on the subject of high quality files, HTC also talked up this One's faculty with incredibly high-fidelity 24-bit/192kHz FLAC files... files which I had a hard time finding in the first place. My small suite of FLAC test songs had to suffice, and the HK One rendered them just fine.

LiveStage is a different beast entirely, as it tries to make your music sound (what else?) more live and natural. The cynic would say it just adds more reverb to the mix... and that person wouldn't necessarily be wrong. If you're at all familiar with the sort of LiveAudio trickery Jawbone uses in its Jamboxes, you'll feel right at home with LiveStage. The effect manages to impart your tracks with a little simulated depth, but it just doesn't jibe with some songs that have been mixed in particular ways -- they'll feel different, and not necessarily right. Perhaps it's best to think of it as a mixed blessing: LiveStage can make a track sound more lifelike and atmospheric at the cost of losing some of its sheer oomph. Oh, and a minor niggle: When Clari-Fi and LiveStage are enabled, the status bar can get so crowded that the time actually gets pushed off the screen. All of this hinges on having a solid pair of headphones to work with, and the Harman Kardon AE earbuds that come in the box (boom, you just saved about $80) are no slouch. Despite the crisp mids, jubilant highs, and rumbling basslines these 'buds bring to the table, they can be a little quirky. Take the clearly marked controls on the in-line mic, to start: the two buttons are emblazoned with plus and minus symbols that would normally correspond to volume controls but they actually change tracks instead. I also found that the included tips just don't fit right for certain people, and its angular edges can dig into the fleshy cartilage of your ear without remorse.

So, with all that said, should you buy one? If you're on Sprint and don't mind a questionable color scheme, the Harman Kardon edition One is probably the way to go -- you're getting the same top-tier smartphone we know and love with a really solid pair of earbuds for an extra $30. Should you find the prospect of a two-toned phone utterly tacky, though, or if you're handy enough to install all of that supposedly exclusive software on your lonesome, feel free to steer clear and save your money.

In this article: HarmanKardon, htc, htcone, htconem8, m8, mobilepostcross
All products recommended by Engadget are selected by our editorial team, independent of our parent company. Some of our stories include affiliate links. If you buy something through one of these links, we may earn an affiliate commission.