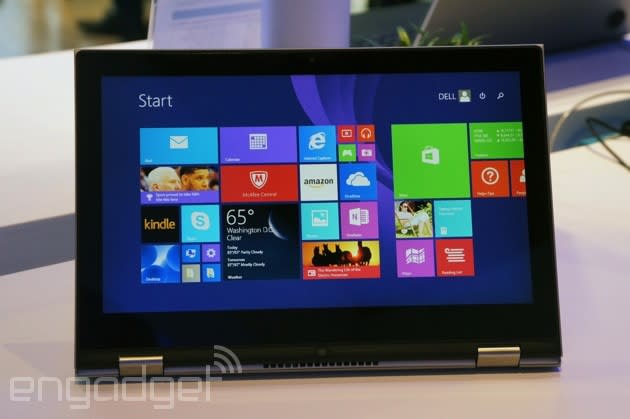 Here's the thing about Computex, the big computer show going on in Taiwan this week: Though lots of PC makers are announcing products here, they're almost all focusing on the low end. It's almost as if computer companies realize PC sales are on the decline, and have to slash prices! Take Dell, for instance: The company is here in Taipei showing off two Windows convertibles, which run the gamut from budget-friendly to solidly mid-range. Both devices -- the Inspiron 11 3000 series and the Inspiron 13 7000 series -- have a Lenovo Yoga-like design, with a screen that flips back 360 degrees into tablet mode (and Tent mode, and Stand mode -- you know the drill). The difference between the two (aside from screen size) is that the 7000 series runs on Intel Core i3/i5 processors, with a passive stylus and up to a full HD display; the 3000 series, meanwhile, maxes out with Pentium-series Bay Trail CPUs and a 1,366 x 768 display. Based on our quick hands-on time, though, even the lower-end 3000-series model seems well-built, with a comfortable keyboard. The 3000 series will ship June 19th for $450, going head to head with devices like ASUS' Transformer Book T100. The more mid-range 7000-series edition won't come out until September, with the price to be announced sometime closer to the on-sale date. Until then, we've got a mix of hands-on and glossy press shots above -- check it out.

In this article: computex2014, dell, dellinspiron, inspiron, inspiron11, inspiron113000series, inspiron13, inspiron137000series
All products recommended by Engadget are selected by our editorial team, independent of our parent company. Some of our stories include affiliate links. If you buy something through one of these links, we may earn an affiliate commission.