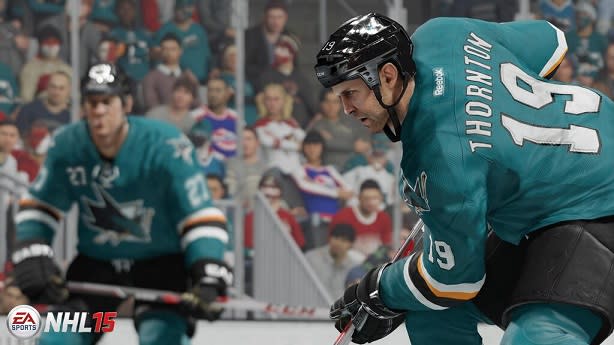 EA Sports offered a first still image of the next entry in its hockey series today, NHL 15, spotlighting San Jose Sharks center Joe Thornton in striking detail. The game was announced near the beginning of May as the first in the series for next-gen systems, and will include character models with three layers that behave independently: the athlete's body, their equipment and their jerseys. Thornton's jersey certainly seems to be wrapping well to his pads in the screenshot.

EA also recently announced the game's retailer-specific pre-order bonuses. Those heavily invested in the game's Ultimate Team mode will want to pre-order their copy through either EB Games or GameStop, as they will receive $24 in Hockey Ultimate Team gold-level card packs, amounting to one pack per week for 24 weeks. All other retailers will include a similar offer, though limited to $15 in Ultimate Team card packs instead. NHL 15 will launch this fall for Xbox One, PS4, Xbox 360 and PS3.
[Image: EA Sports]
In this article: EA, EA-Canada, EA-Sports, eb-games, Electronic-Arts, gamestop, hockey, microsoft, nhl, nhl-15, playstation, pre-order, pre-order-bonus, ps3, ps4, screenshot, screenshots, xbox, xbox-one
All products recommended by Engadget are selected by our editorial team, independent of our parent company. Some of our stories include affiliate links. If you buy something through one of these links, we may earn an affiliate commission.