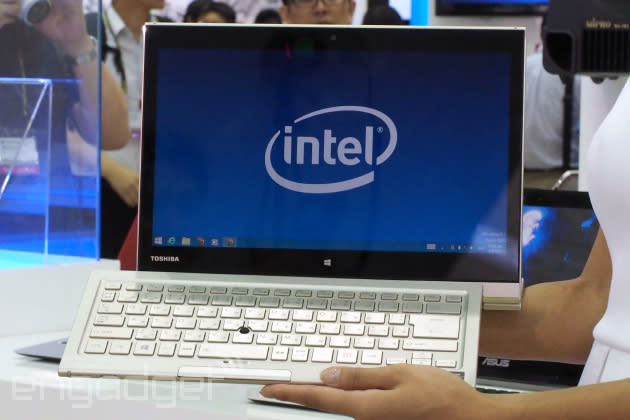 Lately, Toshiba's all about multitasking laptops -- at CES, the company showed off a "5-in-1" laptop concept with a detachable keyboard, and here at Computex, we're getting a look at the "7-in-1" Kirabook L93. Like Toshiba's Satellite Click, the L93 includes a detachable keyboard base, so it works in standard laptop and tablet modes. The L93's flexible hinge also lets you use the device in display mode, with the base either attached or separated. While it's arguably another iteration of Toshiba's Lenovo Yoga-style devices, you do have more modes than ever to flip through.

Even with a perfectly made laptop, the ability to fold it in so many ways is part-gimmick, part-useful (how important is it to use the display propped up without the keyboard attached, really?), and the Kirabook L93's design is a tad too complicated to be convenient. Re-attaching the keyboard base required the help of two Intel spokespeople in the booth, and in the process, one rep's shirt got caught in the latch mechanism. It's definitely the sort of thing that would get easier the more you use the device, though, so that design quirk isn't reason enough to write the product off.

There are a few other strange features, though: There's a somewhat gummy pointing stick in place of a trackpad, so you'll definitely want to take advantage of the 13-inch touchscreen. Below the keyboard, there are small right- and left-click buttons, which felt a little stiff when clicking around Windows 8.1. Hey, at least it has a full chiclet-style keyboard layout instead of shallow keys with no travel. The L93 is very thin, and the 2,560 x 1,440, 13.3-inch display looks crisp, though even the maximum brightness seemed a bit dark on the bright showroom floor. Specs aren't particularly high-end, but they're enough to get some work done: There's a 128GB SSD, 8 gigs of RAM and a Core i5 Haswell processor.

Overall, the L93 is an interesting take on the convertible laptop, and those looking for a versatile machine might want to give it a once-over. That said, it's priced at €1,900 (about $2,600), and so far availability has only been announced for Japan. For now, take a look at our hands-on gallery to get a closer look at the laptop's many modes.

In this article: computex2014, Convertible, kirabook l93, toshiba, toshiba kirabook l93
All products recommended by Engadget are selected by our editorial team, independent of our parent company. Some of our stories include affiliate links. If you buy something through one of these links, we may earn an affiliate commission.