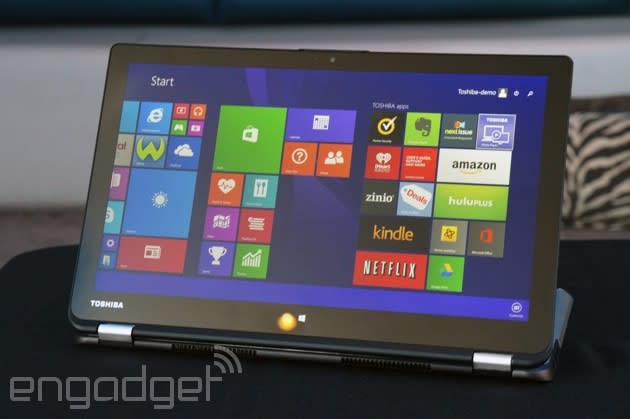 The last time we heard from Toshiba it was doing its annual back-to-school notebook dump. Turns out, the company wasn't quite through: It just announced a trio of convertible laptops. Of the three, the closest thing to a flagship would be the Satellite Radius, a 15-inch notebook that essentially apes Lenovo's Yoga line. Which is to say, it has a 360-degree hinge that can be positioned in one of five modes, including notebook, tablet, "Presentation" (upside down, keyboard in), "Audience" (screen out, keyboard tucked under) and "Tabletop," with the entire machine lying flat on the table. Sound familiar? That's because it is. 10
What's curious is that Toshiba recently showed off something much more innovative: a "5-in-1" prototype laptop with a snap-off keyboard, making it a cross between a dockable tablet and a Yoga-like convertible. According to Toshiba, that machine is still in development, so if we're lucky, we might even see it later this year (one can hope). For now, though, the best thing Toshiba has to show in this space feels an awful lot like Lenovo's offering, just with a bigger screen. If you're thinking of picking this up ahead of the new school year, the Radius will ship in early July, with prices starting at $926 (in the US, at least, it'll be sold exclusively at Best Buy). For the money, you get either a Core i5 or 7 processor, 8GB of RAM, up to 1TB of storage space, 802.11ac, Harman Kardon audio and Toshiba's usual "Sleep & Charge" USB 3.0 port for keeping your other gadgets juiced.

Additionally, Toshiba refreshed the Satellite Click, its tablet/laptop hybrid that came out last year. The new version actually consists of two models, the Click 2 and Click 2 Pro, each of which includes a 13.3-inch screen and bundled keyboard dock. Though their similar names would suggest a family resemblance, the two differ in both design and processing power. As the clearly lower-end device here, the Click 2 makes do with an Intel Pentium processor, 1,366 x 768 resolution, a spinning hard drive (up to 500GB) and kind of a clunky hinge mechanism that requires you to put one hand on the latch and another on the tablet. The Click 2 Pro, meanwhile, steps up to an Intel Core processor, full HD display. 128GB solid-state drive. and a slimmer build designed so that you can un-dock the tablet with one hand. Also, the keyboard dock here will have an optional 500GB hard drive and spare battery - amenities not offered on the lower-end Click 2.


Both machines will ship in late June, according to Toshiba, with the Click 2 priced from $587 and the Click 2 Pro starting at $1,029 (the version with the spare battery/hard drive will cost $1,280). Oh, and everything will be sold exclusively in Best Buy, at least here in the US.
In this article: Click2, Click2Pro, hands-on, Radius, SatelliteClick2, SatelliteClick2Pro, SatelliteRadius, Toshiba, ToshibaClick2, ToshibaClick2Pro, ToshibaRadius
All products recommended by Engadget are selected by our editorial team, independent of our parent company. Some of our stories include affiliate links. If you buy something through one of these links, we may earn an affiliate commission.