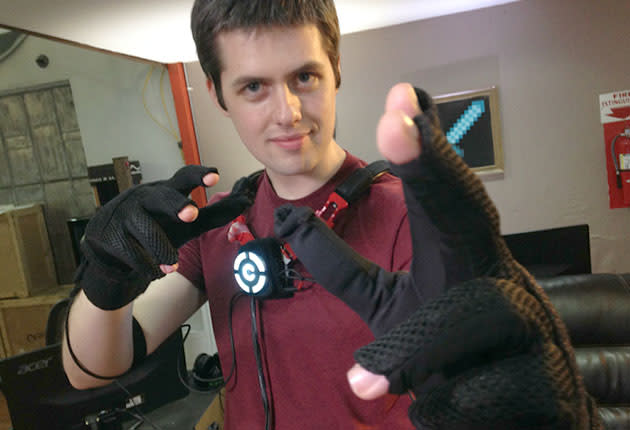 With the sale of Oculus Rift to Facebook for $2 billion, virtual reality has officially become very interesting for developers. One of the companies trying to ride that wave is Control VR, which is ready to launch its gesture control gloves on Kickstarter. Though VR gloves have been around for a long time, so far they've been prototypes, DIY projects or very pricey devices used for surgery, robotics and other specialized fields. Control VR is aiming wider, however, with an early backer price of $350. It believes it can hit that number using DARPA-designed microsensors which detect small inertial changes in order to finely track your arms, hands and fingers. That'll let you control virtual objects like game characters and 3D animations, or even physical devices like robots or military hardware.

The development kit will come with 20 free demo apps, and support Windows, Android and Mac operating systems. In addition, the team will supply an open-source SDK to create software for the Oculus Rift, Google Glass and even the Parrot AR drone. As with Oculus, Control VR is targeting consumers as much as it's targeting businesses. Potential uses include 3D motion capture (including the difficult-to-animate fingers), music composition, design, a control interface for Google Glass and Oculus Rift, a controller for games and apps like Google Earth, and even a drone control interface.

While all of this sounds pretty ambitious, the company believes there's no similar tech that's close to the same state of readiness. As such, they're seeking $250,000 (the same sum originally sought by Oculus) on Kickstarter (update: now live). A $350 pledge will get you on the early backer's list and net you a one-arm system with a 7-sensor glove, a one-sensor chest piece, an arm sensor, 20 app demos and the SDK. $600 will get you a two-arm system. If you're among the first 500 backers of either package, Control VR says you'll receive it sometime in December of this year, while later backers will receive theirs in January 2015. You can now pledge at the Kickstarter page right here.

Update: Control VR's Kickstarter page is now up after a delay, complete with a new video embedded above. The price for a two-arm kit is $600, not $699 as originally stated.

In this article: ControlVR, finger-control, glove, Kickstarter
All products recommended by Engadget are selected by our editorial team, independent of our parent company. Some of our stories include affiliate links. If you buy something through one of these links, we may earn an affiliate commission.