Alan Moore's Electricomics promises to reinvent the medium, but not too much 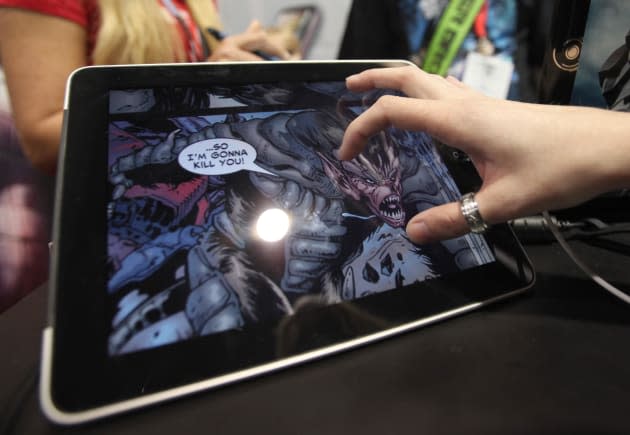 If you've seen V for Vendetta, Watchmen or even The League of Extraordinary Gentlemen, you've encountered the work of Alan Moore. He's one of the comic industry's most prolific and influential authors, and now he's trying to take the medium into the modern era. Moore is building a digital comics app designed to serve as both comic itself and a collection of open-source tools for creating the next generation of digital comics. The project, due for launch in early next year, is called Electricomics -- but don't expect books published on the platform to be animated or overly interactive: Moore insists that adding digital effects to comics won't make them better.

"It's a very well developed technology and it's very difficult to add to or reproduce comics in a more elegant way," Moore tells The Guardian, speaking of the comics medium as it exists today as its own 'technology.' When Electricomics launches, it'll include a 32-page collection of stories showcasing what comics can be in a digital medium, and Moore wants to keep it simple. "Avoiding whistles and bells would be one of the first tenets that digital comics should try to stick to," he says, explaining that the gimmick of animated effects doesn't necessarily convey a scene better than still art. Although Moore wants to keep the comics medium unsullied by the temptations of new technology, he admits we can do more with digital comics than we're doing now. Still, he admits he's not exactly an expert in the medium's digital offerings as they exist today. "I've got absolutely no idea because I don't have any online capacity," he said. Moore told The Guardian that he doesn't have any "devices or tablets," and that he doesn't keep up with the comics scene these days. Even so, he wants Electricomics' tools to give creators the same flexibility as paper while opening the medium to the new possibilities. He also hopes the platform will make the medium more appealing to today's youth.

"Kids avoid these things like the plague," he told The Guardian, teasing the industry's tendency to pander to adults that grew up reading comics. "Why would a 13-year old bother reading a comic book when they have these different devices and the comics are being made not for them, but for 40 to 60 year-olds?" Moore hopes the app will give new creators a chance to break away from the superhero comics too, accusing the mainstream genre of being uncreative and dated. "Nothing lasts forever." Unfortunately, we won't know if Moore's digital comics vision will pay off until 2015. Check out The Guardian for the full interview.

In this article: alanmoore, comicbooks, comics, digitalcomics, electricomics
All products recommended by Engadget are selected by our editorial team, independent of our parent company. Some of our stories include affiliate links. If you buy something through one of these links, we may earn an affiliate commission.