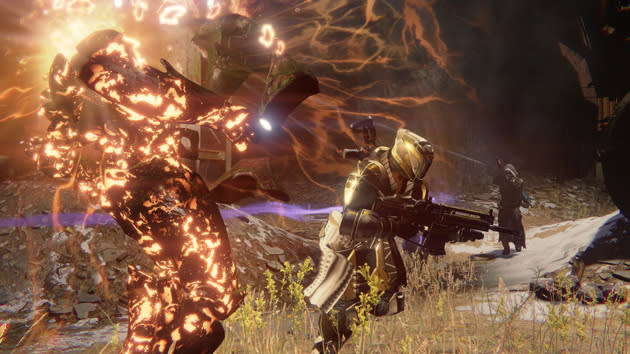 It looks like Microsoft's decision to let game developers access system resources previously reserved for Kinect features is already paying dividends. Bungie says that the resulting performance boost will let Destiny run on the Xbox One at a higher 1080p resolution while maintaining 30 frames per second; in short, it's now as sharp-looking as the PS4 edition. Xbox head Phil Spencer also tells Major Nelson that the anything-goes shooter Sunset Overdrive will take advantage of the loosened requirements.

Whether or not you think the crisper visuals actually matter, they suggest that there's an end in sight to the constant debates over lower resolutions in some Xbox One games, such as Titanfall and Watch Dogs. Cross-platform titles that don't need the Xbox's Kinect support now stand a better chance of looking the same on modern systems. That's good news for Microsoft, which is still struggling to overtake Sony in console sales, but it's particularly heartening for gamers -- you can focus on enjoying good games instead of worrying that you got a raw deal.

After @xboxp3 interview I've been asking devs about impact of new Xbox sdk on perf. Bungie says it will get Destiny to 1080p/30fps on XB1.

In this article: bungie, destiny, gaming, hdpostcross, kinect, microsoft, videogames, xboxone
All products recommended by Engadget are selected by our editorial team, independent of our parent company. Some of our stories include affiliate links. If you buy something through one of these links, we may earn an affiliate commission.