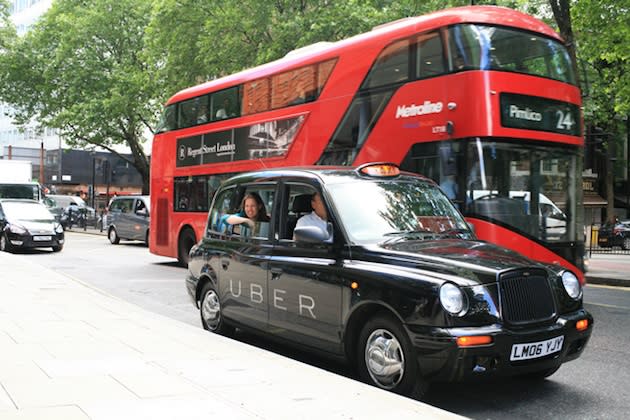 As taxi drivers in London and other big European cities prepare to blockade streets in protest of Uber, the private hire service has come up with a compromise. Accused of stealing custom from London's black cab drivers, Uber today added a new tier to its three existing ride options that allows its vocal opponents to offer rides using its mobile tech. It's called UberTAXI and it lets users book and pay for a black cab directly through the Uber app.

Transport for London (TfL) has already said that Uber's app-based fare system doesn't need to be regulated (unlike black cab taximeters), but the transport agency will call upon the High Court to issue a final decision. In order to keep its nose clean, Uber says UberTAXI will follow the same fare rates set out by authorities and will not include booking fees or additional charges for riders. Commission is also capped at 5 percent, which the company insists is the the lowest in the city. It's a blow for services like Hailo, which recently announced plans to offer private services, as Uber is now expanding into market where it had little competition.

There's no saying whether today's launch will affect planned demonstrations in London or do much to quell growing discontent over Uber's operations. Remember, UberTAXI will be just one of four ride options Uber offers in the city (UberX, EXEC and LUX make up the other three) -- even if drivers migrate across, users will ultimately decide whether those with The Knowledge are worth using.

Update: CNBC reports that Uber saw a record number of new customers sign up to its app, as cab drivers began blockading streets in London. The company says it recorded an 850 percent rise in sign-ups compared with last Wednesday, no doubt helped by the media coverage generated as a result of the strike action.

In this article: black cab, hailo, london, taxi, uber, ubertaxi
All products recommended by Engadget are selected by our editorial team, independent of our parent company. Some of our stories include affiliate links. If you buy something through one of these links, we may earn an affiliate commission.