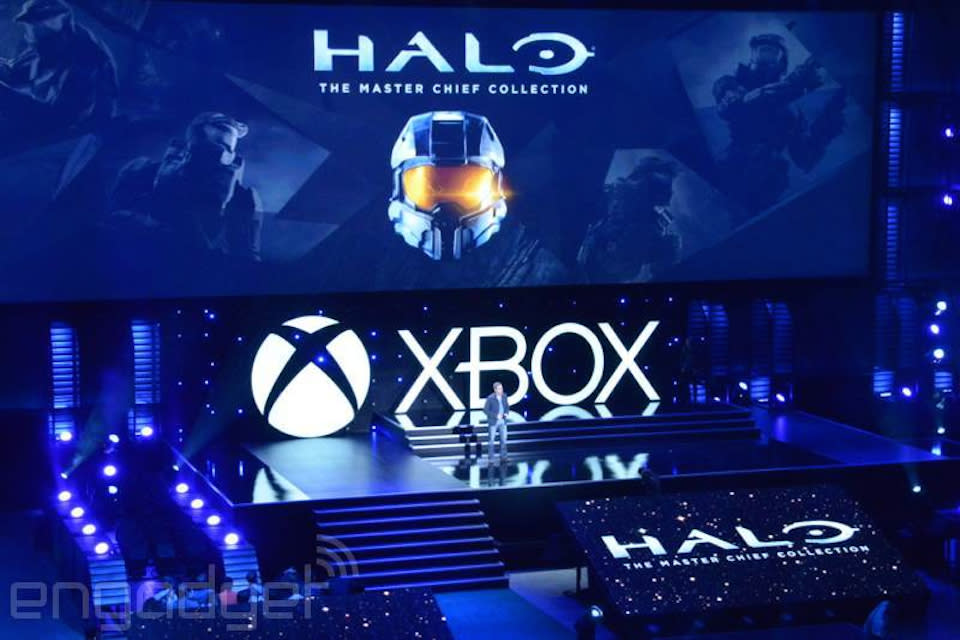 We told you that Halo: The Master Chief Collection (MCC) existed before anyone else, but thanks to the package being officially official, we now have a veritable truckload of details about it. When the game releases November 11th, just over 10 years after Halo 2's launch, it'll pack remastered audio and visuals, four whole games on one disc, a staggering number of multiplayer maps and even a few surprises.

"We think about our fans," 343 Industries head Bonnie Ross said during the presentation I attended at E3. "We're going for the nostalgia play, but [MCC] is about providing a new way to play. For us that are geeking out on story, it's about being able to connect to Master Chief's past."

The future, however, is the impetus for that past. Developer 343 Industries (Microsoft's internal Halo studio) knows that there's an entire generation of gamers that weren't even born when the franchise launched in 2001, and the team doesn't want people to avoid next year's sequel simply because they aren't caught up on the decade-plus narrative. The MCC serves to address that by putting Master Chief's story all in one place to give context for next year's Halo 5: Guardians.

"We want you to know the full story [of Master Chief]," Ross said. "We want to make it incredibly accessible and so that the pieces are aligned leading up to Halo 5."

Where Halo 4 tucked a lot of its story within semi-hidden computers in the game, those will be unlocked from the outset in MCC, and Halo 2 is getting a series of those off-the-beaten-path narrative points, too. Those will serve as a "breadcrumb trail" to Halo 5 and also flesh out the tale of The Arbiter, the disgraced alien general. Blur Studio, the company responsible for some of Halo 4's TV spots, is also creating narrative book-ends for the prologue and epilogue of the MCC, which should help fill in the gaps for those who haven't been following the franchise's wealth of expanded fiction, too.

I was told that the game is expected to be sold digitally, but if all you want is Halo 2, you're out of luck: 343 isn't breaking the game into discrete pieces; you have to buy the entire collection as a whole. So as not to alienate returning players, every campaign mission from every game is unlocked at the outset -- pretty great news for those who don't want to slog through "The Library" from Halo: Combat Evolved ever again. This aspect consequently gave 343 the chance to introduce curated playlists that let you bounce around the best moments from all four games' campaigns back to back to back. Want to play the last level of each game in succession? Do it. To be clear, however, these are put together by the development team, not the users. At least, not yet.

"It's something [the MCC developers] started out trying to do," Ross told me. "It may be something we get back in. It'd be pretty cool to send your own custom playlists to your friends; it's just we're doing a ton with this project already. At first, we're going to get community feedback so it feels like there are more personalities than just 343 making [the playlists]."

MCC lead Dennis Ries agreed, but said it isn't something he and his team can do right now -- they're working to get the base game out to fans this November. Any suggested additions at this point will likely come post-launch.

"That's something that we know we can give to our audience," he said. "If we have that opportunity, we're going to."

With 2014 being Halo 2's 10th anniversary, 343 is remastering it with even more care than it gave to the game's forebearer. It's a Halo 2 that's been gussied up aurally and visually, with its roughly 50 minutes of cinematics getting entirely rebuilt by Blur Studio. Like its predecessor, you'll also be able to swap between old and new graphics with a push of a button.

Some of Blur's previous Halo work

This time out, though, there isn't a brief pause as it happens; the trick is instantaneous. There was a live demo during the presentation where whoever was playing jumped back and forth between modern and classic graphics while popping off headshots, all without missing a single kill. The Xbox One's horsepower advantage over the Xbox 360 is readily apparent here.

The love for the title that legitimized console-based online shooters doesn't stop there, either. Six of Halo 2's classic adversarial maps got the remaster treatment as well, including "Lockout," "Ivory Tower" and "Ascension." If those get boring, there are still some 97 other maps to keep you busy: Every map that's ever shipped for a Halo game is included in the MCC, even if they were exclusive to PC ports of the first two titles. Yes, you'll finally be able to play online pistols-only matches on "Wizard." I'm stoked too. The MCC flavors of Combat Evolved's maps use the PC version as their base, so while "Hang 'em High" won't look as good as something from, say, Halo 4, it will likely look better than it did 13 years ago.

Each Halo's online combat has been markedly different, however. To address that, 343 is isolating each release's unique features to their respective title. It might sound disappointing that you can't use a Halo 3's bubble shield on "Sidewinder" from Halo: Combat Evolved, but it's probably for the best; each title's maps were designed to handle those wrinkles. Keeping the entire online experience cohesive is a voting system similar to what's been in previous games. Pick your desired game-type; pick from a Halo 1, 2, 3 or 4 map; murder; finish and repeat.

The inclusion of every game in Chief's saga into the MCC might have a downside, though. Come 2017 and 2022, we might not see anniversary packages for Halo 3 and Halo 4, respectively, because they're represented here. Those games, along with Combat Evolved Anniversary, are more or less being left alone in terms of remastering because they appeared on the Xbox 360 to start. I was told they'd run at 60 frames per second and get some additional post-processing effects, but that an overhaul wasn't in the cards -- especially since Halo 4 still looks incredible.

"The internal Halo 4 team all said 'this is what it was supposed to look like on Xbox 360!'" Ross excitedly told me. "It looks amazing."

In this article: 343Industries, e32014, gaming, Halo, Halo2, Halo3, halo5guardians, HaloPc, halothemasterchiefcollection, hd, hdpostcross, microsoft
All products recommended by Engadget are selected by our editorial team, independent of our parent company. Some of our stories include affiliate links. If you buy something through one of these links, we may earn an affiliate commission.