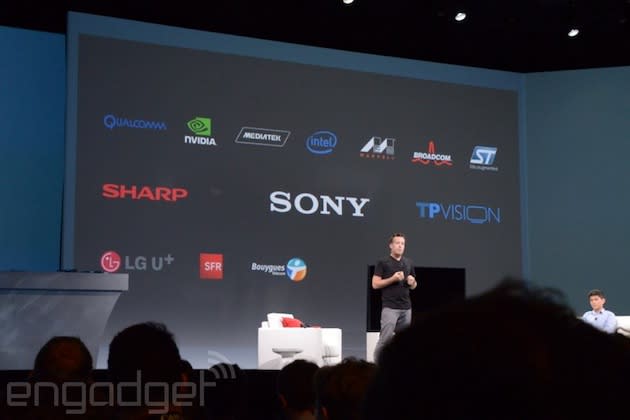 Google isn't giving up on TVs yet. While its new Android TV flavor of Android L will hit the streets in set-top boxes aimed at game consoles and media streamers, it announced that next year smart TVs from Sony (all of its 4K and smart TVs), Sharp and TP Vision/Philips will ship with the OS. It's also working with some familiar TV providers overseas like LG U+ in Korea (not LG Electronics TVs, which are moving to webOS) and SFR in France, as well as the chipmakers that build the components for smart TVs and boxes as seen in the slide above. The difference from the original Google TV approach is that the company isn't treating Android TV as an entirely separate platform from mobile, and everything needed to handle video from HDMI, TV tuners or IPTV receivers is now natively included in Android L. We'll probably have to wait until CES 2015 to find out if it's having any success convincing more TV manufacturers to join in (again), but these are a start.

Android TV: Google Cast, voice search and tailored content. Visit http://t.co/H3lQNHUvcn for a preview and look for devices this fall.

In this article: android, androidl, androidtv, google, googleio2014, hdpostcross, io14, philips, sharp, sony, TpVision
All products recommended by Engadget are selected by our editorial team, independent of our parent company. Some of our stories include affiliate links. If you buy something through one of these links, we may earn an affiliate commission.