Samsung's next Galaxy Tab S should be a whole lot wider

Samsung's latest flagship tablets launching July 4th for £319 and up 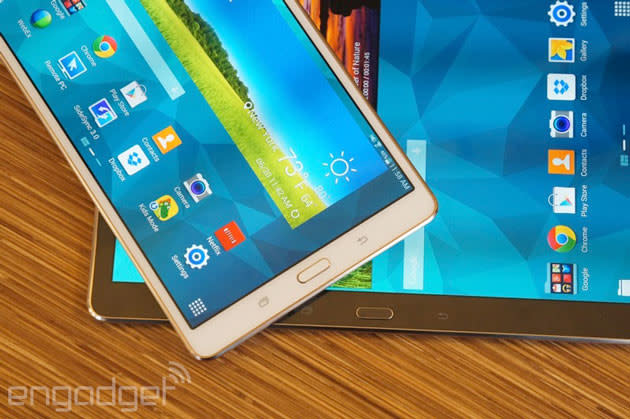 Samsung has such a fondness for tablets it's sometimes hard to keep up. The recently announced Galaxy Tab S, 8.4- and 10.5-inch Android slates stand out from the crowd as Samsung's newest flagship line, and the company said today they'll arrive in the UK on July 4th (aka next Friday). Both models, which marry high-end internals with WQXGA (2,560 x 1,600) displays, will be available online and through several retails stores (including Samsung's own) from £319 for the WiFi-only, 8.4-inch version and £399 for the full-sized slate.

Update: In addition to existing free content partnerships with Deezer, Amazon and everything in the "Galaxy Gifts" package, Samsung's announced its newest slates will also come with a three-month Sky Movies Pass for streaming service Now TV (though you need to activate it by the end of September).

In this article: galaxytabs, galaxytabs10.5, galaxytabs8.4, nowtv, samsung, samsunggalaxytabs, sky, tablet, uk
All products recommended by Engadget are selected by our editorial team, independent of our parent company. Some of our stories include affiliate links. If you buy something through one of these links, we may earn an affiliate commission.