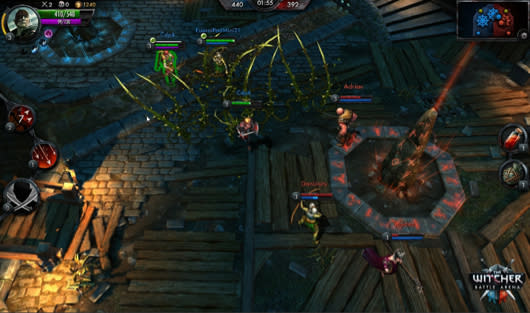 CD Projekt Red's first foray into multiplayer Witcher territory isn't an MMORPG but rather a MOBA. Not only is The Witcher: Battle Arena a MOBA, but it's a mobile MOBA that's due for Android, iOS, and Windows tablets and phones sometime during Q4 2014.

"There will be a monster-hunting mode, kind of an isometric multiplayer [in the future]," explains project manager Tadek Zielinski. "There will be a boss mode, where you will be able to fight the bosses -- that will be purely a (player verses enemy) experience. And we are thinking of other competitive modes. We have a classic one-lane MOBA experience with towers, but we have a different approach because we don't want to have minions, we don't want to have farming."
In this article: CD-Projekt, cd-projekt-red, f2p, free-to-play, moba, pvp, the-witcher, the-witcher-battle-arena, witcher, witcher-moba
All products recommended by Engadget are selected by our editorial team, independent of our parent company. Some of our stories include affiliate links. If you buy something through one of these links, we may earn an affiliate commission.