VAIO launches its first laptops without Sony and they're very, very familiar 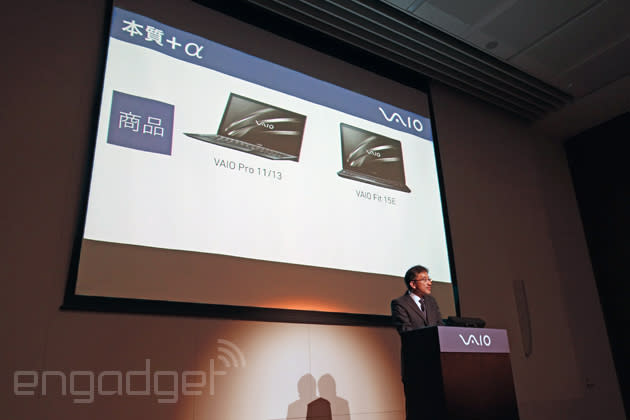 VAIO's back. It's no longer Sony's PC business, but it's own independent beast. Teasing its relaunch online, the company says that it's free and that things are going to change. The Japanese blurb says that's largely due to the fact that it's now a "small" PC maker -- and it's the same message the new company is trying to deliver at its launch event today in Tokyo. Unfortunately, its debut range is more than a little familiar, being identical to the Pro and Fit models its parent company launched almost exactly one year ago. Minus that old Sony branding, both go on sale today in Japan. However, VAIO currently has no plans to sell laptops outside of its homeland. A spokesperson said that it's focusing on success in Japan first.

We're not going to complain too much about either machine (both were strong laptops from Sony, and the 11-inch VAIO Pro was downright good-looking) but we're still hoping VAIO will pull something else out of the bag soon. To the new CEO's credit, Takayuki Sekitori admitted that the two initial models were very well received -- and that was part of the point. The company says that its work will center "choices" and "focus" -- it's only making PCs now and it vows to maintain that VAIO DNA and attention to detail in whatever it's got planned next.

In this article: newvaio, pc, pcs, sony, vaio, vaiofit, vaiopro
All products recommended by Engadget are selected by our editorial team, independent of our parent company. Some of our stories include affiliate links. If you buy something through one of these links, we may earn an affiliate commission.