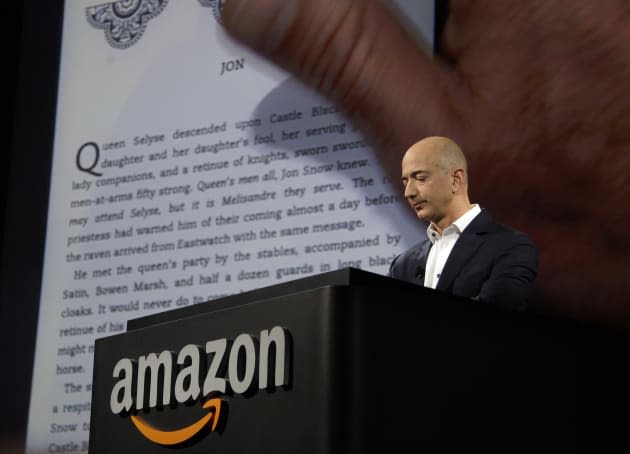 Despite sounding like a rogue militant organization from G.I. Joe, Hachette is actually a book publishing group. Tame as that may sound, Hachette is currently engaged in a high-stakes game of Chicken with a juggernaut in the book sales world: Amazon. It's all part of a long-running dispute between book publishers and "the everything store"; even the book titled after Amazon's moniker was involved in the dispute. It goes like this: Amazon wants to price its e-books one way, and publishers want things another way. While the negotiations occur, Amazon pushes back by slowing delivery of physical books by publishers involved in negotiations or, sometimes, carrying limited stocks intentionally so the books are unable to be ordered. Another tactic Amazon's now employing in the dispute? Appealing directly to authors. With cash.

Amazon's promising select writers "100 percent of the sales price of every Hachette e-book we sell," Amazon executive David Naggar said in a letter sent to a group of authors, acquired by The New York Times. The letter allegedly also promises to suspect previous tactics employed by Amazon in the ongoing power struggle.

If nothing else, the attempt shows that Amazon's willing to work negotiate with the parties involved. Authors Guild president Roxana Robinson points out that this tactic could serve to drive a wedge between authors and their publishers. "This seems like a short-term solution that encourages authors to take sides against their publishers," she said.

Hachette and Amazon aren't offering statements. Brad Stone's The Everything Store is available once more on Amazon.

In this article: amazon, e book, e books, e reader, e readers, e-book, e-books, e-reader, e-readers, ebooks, hachette, jeffbezos
All products recommended by Engadget are selected by our editorial team, independent of our parent company. Some of our stories include affiliate links. If you buy something through one of these links, we may earn an affiliate commission.