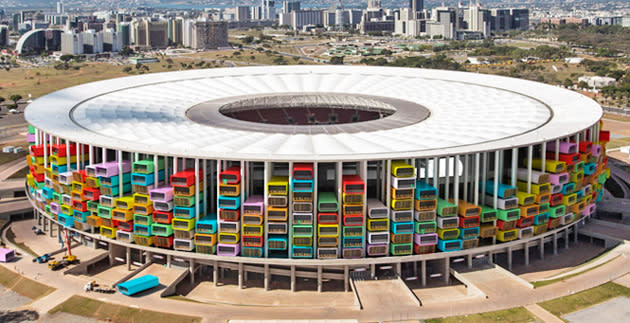 Soccer fans around the world are going through withdrawal now that the World Cup is over, and in Brazil, people are beginning to think about what should be done with the 12 stadiums that were built or renovated for the tournament. A pair of French architects has come up with a brilliant idea: Convert the stadiums into affordable housing. Solar panels come in all shapes and sizes -- but rarely do they come in the shape of a huge duck. A team of London-based designers has submitted a proposal to build a 12-story duck-shaped renewable energy generator for the Land Art Generator Initiative, which will be held later this year in Copenhagen.

Meanwhile, Jamaica launched the world's largest wind-solar hybrid installation, and global clean energy investment surged in the second quarter of 2014, driven by big wind and solar deals and installations of small-scale, rooftop solar photovoltaics. California is currently experiencing a drought of historic proportions, but that isn't stopping one company from extracting water from the Southern California desert for its bottled water operations. A new report finds that Nestlé is quietly removing undisclosed amounts of water from the state for Arrowhead bottled water.

The world's first tower made of mushrooms recently debuted at Brooklyn's PS1 museum, and Inhabitat caught up with architect David Benjamin to discuss the groundbreaking structure. The tower is made from mycelium (mushroom root) bio-bricks, and it is being used to test the viability of mushrooms as a building material. Elsewhere on the green architecture front, the design firm Chartier-Corbasson released plans for a skyscraper made entirely from its residents' trash. As time passes and residents produce more trash, the tower would grow taller. And in Singapore, architect Moshe Safdie unveiled plans for a massive biodome with a circular waterfall that descends from the center of the roof.

In green transportation news, Tesla CEO Elon Musk announced that the company's latest sedan would be called the Model 3 when it goes on sale in 2017. The electric car will be both cheaper and smaller than the Model S, and it's expected to sell for about $35,000. Tesla also passed an important milestone in June as its rapidly expanding Supercharger network delivered more than one gigawatt hour of energy to Model S electric vehicles across the country. According to Tesla, the Supercharger network has saved 168,000 gallons of gas and offset 4.2 million pounds of carbon dioxide. The city of Helsinki wants to do away with personal cars altogether within the next 10 years by launching an integrated transit system that will make public transit more convenient and easier to use than commuting by automobile. And in Japan, Ferrari designer Ken Okuyama has drafted plans for a luxury sleeper train that looks like a boutique hotel on rails. The deluxe train looks futuristic on the outside and decadently retro on the inside, and the entire 10-car train only carries 34 passengers.

Teenagers continue to pave the way with some of the world's most innovative projects. The latest wiz kid is Thomas Suarez, a 15-year-old who claims to have designed a 3D printer that is 10 times faster and more reliable than anything currently on the market. In other 3D printing news, the company Kudo3D recently unveiled the Titan 1, a printer that can print bigger objects faster than its competitors. The Titan 1 reached its Kickstarter goal of $50,000 within two minutes of launching the campaign, and it raised a total of $687,116. In other green design news, the folks at Oru Kayak have created the world's first origami-inspired, flat-pack kayak. The one-of-a-kind kayak is now for sale, and you can get a $50 discount with this coupon code. The Spanish company peSeta and American designer Marc Jacobs have collaborated to create a beret with a turntable mounted on it. And a new report issued by China Labor Watch reveals several instances of child labor in a Samsung supplier's factory in China.

In this article: eco, eco-friendly, green, inhabitat, InhabitatsWeekInGreen, science, transportation
All products recommended by Engadget are selected by our editorial team, independent of our parent company. Some of our stories include affiliate links. If you buy something through one of these links, we may earn an affiliate commission.