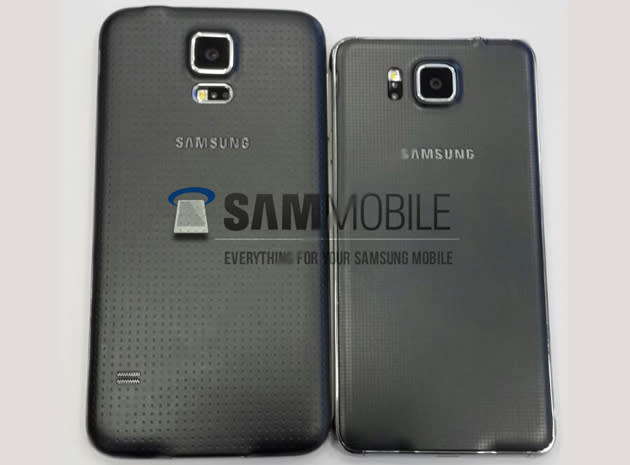 Many have assumed that Samsung's fabled metal smartphone would be a very high-end device, but some new leaks hint that it could be considerably more modest. Both SamMobile and Tinhte have posted photos of the Galaxy Alpha (shown on the right), a mid-range Android handset that reportedly touts a 4.7-inch screen and that long-rumored, slightly more fashionable metal trim. It's not certain exactly what's under the hood beyond LTE-Advanced data, although SamMobile suggests that the internals would slot in neatly between the Galaxy S5 and its smaller, slower mini counterpart. Alongside a previously rumored 720p screen, the Alpha would supposedly pack 32GB of (sadly non-removable) storage and either an Exynos 5 Octa or a Snapdragon 800 for a processor -- good enough, but not great.

The real question may not be when we'll see the Alpha, but where we'll see it. While the handset could show up as soon as August, there are concerns that Samsung can't produce the phone in meaningfully large numbers. It may end up being a limited release that ships to just a handful of countries, like the company's native South Korea (Tinhte's shots reveal a Korean "LTE-A" logo). If this is the metal-clad Samsung phone of legend, it won't necessarily take the world by storm.

In this article: android, galaxyalpha, leak, mobilepostcross, samsung, sm-g850, smartphone
All products recommended by Engadget are selected by our editorial team, independent of our parent company. Some of our stories include affiliate links. If you buy something through one of these links, we may earn an affiliate commission.