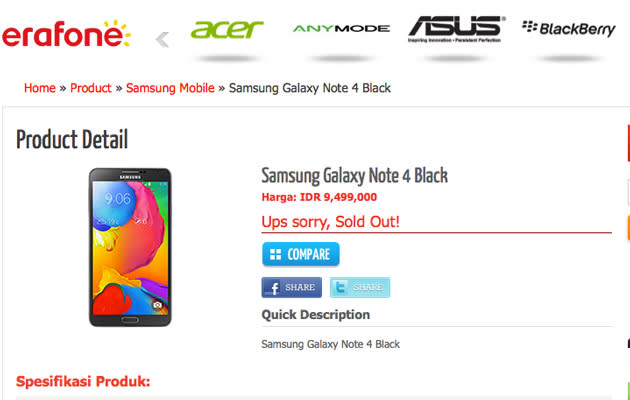 If there's one thing that you're guaranteed to see at IFA, it's Samsung showing off the fourth version of the Galaxy Note. Unfortunately, any surprise factor the company might have been relying on has been lost if this credible-looking spec list is true. Indonesian retailer Erafone is claiming that the new flagship will arrive with a 5.7-inch 1,440 x 2,560 (515 ppi) Super AMOLED display and a 16-megapixel camera with optical image stabilization. Like other Samsung units, the device will come in two variants, one packing a quad-core Snapdragon 805 (SM-N910S) and an octa-core version running an Exynos 5433 (SM-N910C) that we assume will remain in Korea. Rounding out the notable specs are 4GB RAM, up to 128GB of microSD card storage and Android KitKat 4.4.3. According to the retailer, the device is priced at IDR 9,499,000, which roughly converts to $812, but either way, September 3rd simply cannot come fast enough.

In this article: 4, Galaxy Note 4, IFA2014, mobilepostcross, Note, Note 4, samsung
All products recommended by Engadget are selected by our editorial team, independent of our parent company. Some of our stories include affiliate links. If you buy something through one of these links, we may earn an affiliate commission.