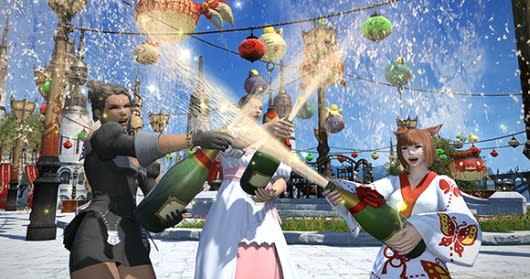 The Final Fantasy XIV anniversary celebration continues to speed onward; players have already started to enjoy the Moonfire Faire festivities, but there's more just around the bend. The game's anniversary page has updated with details about the three returning cross-promotion events from Final Fantasy XI, Dragon Quest X, and Lightning Returns: Final Fantasy XIII, allowing players who missed out the first time to get their minipets and vanity gear during the repeat engagements. But there's also a new event coming to the game starting on the date of the relaunch: The Rising.

Participants in this event will just need to swing by Limsa Lominsa to unlock the "Huzzah" emote. There will also be new minipets and fireworks available for players to buy and use. The site has also posted the first of its lore pieces bridging the gap between the Calamity and the start of the game's storyline, tracking Maelstrom leader Merlwyb's path from the Battle of Carteneau to the rebuilding of Limsa Lominsa. Keep your eyes peeled for more reveals as the celebration continues onward.
In this article: anniversary, anniversary-content, anniversary-event, backstory, console, consoles, fantasy, ff, ff14, ffxiv, final-fantasy, final-fantasy-14, final-fantasy-xiv, in-game-events, lore, news, news-items, setting, square, square-enix
All products recommended by Engadget are selected by our editorial team, independent of our parent company. Some of our stories include affiliate links. If you buy something through one of these links, we may earn an affiliate commission.