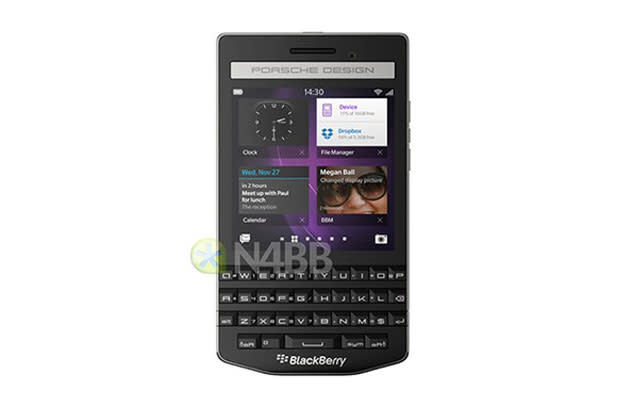 Since 2012, Porsche Design and BlackBerry have worked together on two high-end handsets that offer a retooled exterior and... not much else. That didn't stop the duo from selling the tweaked aesthetic for over $2,000, though. It seems that the pair is up to its old tricks once more, as the P'9983 (code named "Khan") phone has unofficially broke from cover. According to N4BB, the second QWERTY device from the two companies will sport BlackBerry 10 on its 3.5-inch touchscreen with 3GB RAM, a dual-core 1.7 GHz processor and 64GB of storage inside. BlackBerry is also set to debut its rather unique 4.5-inch square Passport device soon, complete with its own personal assistant. But this leak begs the question: Why?

If you'll recall, there was the QWERTY P'9981 two years ago, and then in 2013, the tandem unveiled a pricier version of the touchscreen Z10. Why continue to crank out limited-edition devices with expensive price tags when the company has been on the ropes for quite a while? I reached out to both Porsche Design and BlackBerry on the matter, and while the Canadian handset maker provided the ol' "we don't comment on rumors" business, I've yet to hear back from the former. One possible explanation is that the high-end retailer wants to keep its shelves stocked with fresh devices, and BlackBerry was happy to continue to help do just that.

Porsche Design only offers one brand of luxury smartphone on its site.

But why would Porsche Design, a luxury brand that appears doing just fine on its own, would still want to associate itself with an outfit that's having its fair share of troubles? Is there a partnership agreement that has to be fulfilled? Was this device in the works before BlackBerry hit the skids? Well, when the partnership began, the design outfit's CEO and a few other of its executives fancied BlackBerry devices as their daily communication tools, so the affinity for those handsets is firmly rooted. Also, Porsche Design only offers one brand of luxury smartphone on its site. It's also worth noting that previous releases were only available in select markets -- like the UK and the Middle East -- which certainly seems to target a specific customer base.

Take Vertu for example. If it weren't for the premium materials and design details, those phones sport a rather modest spec sheet. And that's exactly what you have here with the rumored P'9983: a highly polished exterior with run of the mill internals. We've yet to find out any concrete details, but we'd surmise a select few are going to buy this thing when it eventually arrives with a $2,000+ price tag. Unless of course, you really like BlackBerry gear.

In this article: blackberry, khan, mobilepostcross, p9983, porche, porchedesign
All products recommended by Engadget are selected by our editorial team, independent of our parent company. Some of our stories include affiliate links. If you buy something through one of these links, we may earn an affiliate commission.