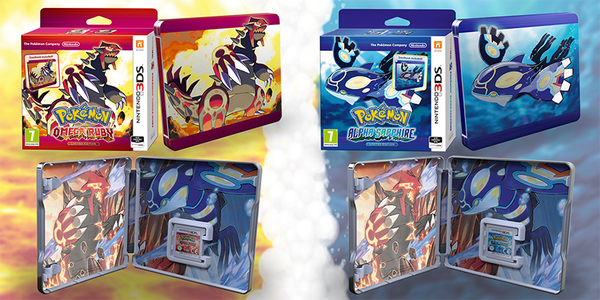 Pokemon Alpha Sapphire and Omega Ruby are getting their own steelbook bundles in Europe, complete with Kyogre and Groudon figurines respectively. Bundles including the game are coming to GAME and Nintendo's online store in the UK, and will be available for pre-order. The House of Mario Marowak lists the steelbook and figurine separately at £40; we've reached out to confirm if that also includes the game at that price.

The Poke-remakes are also scoring some other pre-order goodies in the UK. Pre-orders of the standalone version at GAME get the respective figure chucked in, while early birds at Shopto will get their own early bird, namely a 2D keyring of Torchic. As for the small matter of the game itself, it hits 3DS in North America on November 21, then a week across the pond on November 28.
[Image: Nintendo]
Show full PR text
LIMITED EDITION STEELBOOK SOFTWARE BUNDLES REVEALED FOR BOTH POKÉMON OMEGA RUBY AND POKÉMON ALPHA SAPPHIRE – COMING 28th NOVEMBER TO NINTENDO 3DS

28th August 2014 – To celebrate Pokémon Omega Ruby and Pokémon Alpha Sapphire releasing on 28th November on Nintendo 3DS and 2DS systems, Nintendo has today revealed limited edition offerings that coincide with the launch of this new Pokémon adventure through the Hoenn region.