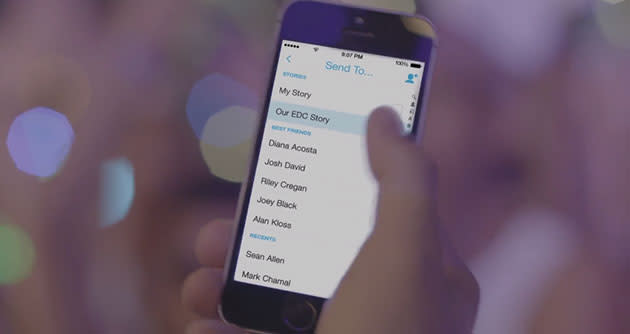 For a number of recent events, including the World Cup and Lollapalooza, Snapchat let users beam their event photos to a crowd-contributed feed known as Our Story. After over 350 hours of snaps were uploaded during the test events (then curated down to just a few minutes for each), the outfit is now letting everyone in on the action. With the latest update, a new Live section rests just below Recent Updates in the app after you capture a photo or some video footage (it's also accessible from the Stories button on the edit screen). From there, simply select the appropriate option you're attending to share your spinet of coverage with the masses. Of course, you don't have to be in attendance to browse the feed and catch on what you're missing from afar.

In this article: messaging, mobilepostcross, ourstory, snapchat, socialmedia, update, video
All products recommended by Engadget are selected by our editorial team, independent of our parent company. Some of our stories include affiliate links. If you buy something through one of these links, we may earn an affiliate commission.