Japanese safety video teaches cats the rules of the road 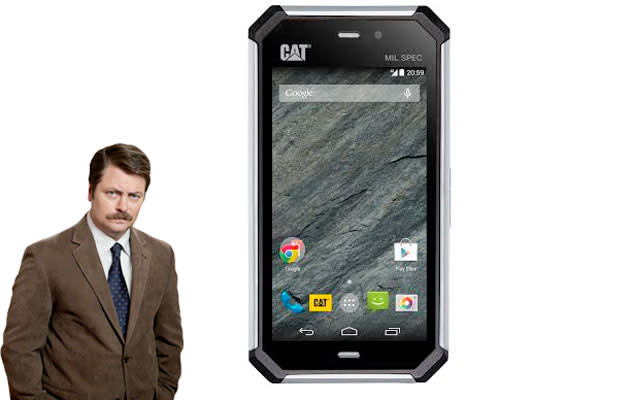 We'd hate to admit it, but you could never really mistake your humble narrator for a manly man, breaking cinder blocks with his pectoral muscles and hanging out at monster truck rallies. That doesn't mean, however, that we can't appreciate the engineering and effort that went into CAT's newest rugged smartphone, the S50. We're told that it's designed "for the outdoors," that terrifying world where there's no WiFi and comfortable furniture we see only in our nightmares. The 4.7-inch handset is coated in a liberal helping of Gorilla Glass 3, but the first time we asked about resolution -- which we later learned is 1,280 x 720 -- the device just glowered at us as if we'd challenged its masculinity. The body of the S50 is waterproof, certified dustproof to IP6X and waterproof to IPX7, which means that it's capable of lasting under a meter of water for half an hour. There's an 8-megapixel camera 'round back, but this phone believes that selfies are nothing more than silly nonsense, which is why the forward-facing shooter is a meek VGA option.

You might be disappointed to learn that there isn't a cuddly inside lurking beneath that austere shell. Alas, you'll just find a 1.2GHz quad-core Qualcomm MSM8926 paired with 2GB RAM alongside 8GB of internal storage that can be bolstered with a 64GB microSD card. Battery-wise, there's a 2,630mAh cell tucked in there, rated for around 16 hours of talk time. The company is also promising access to its own app store, which claims to offer a curated experience such that its customers "don't need to trawl through the 1.2 million apps on Google Play to find the one they want." It'll be available at some point in the near future, priced at $499/€479, depending on which side of the Atlantic you reside.

Update: We had the chance to experience the ruggedness of the S50, which reps happily dropped repeatedly on the floor. The device, which will come to Germany soon, with North America following either in the last quarter of this year or the first quarter of the next. With a rubberized back and corners along with strong plastic sides, it definitely feels solid enough to endure more than a fair amount of torture. It's a bit thick, but fortunately it's not terribly large to make it an uncomfortable fit.

In addition to its waterproof nature, the phone comes with wet-finger tracking, so you can still swipe to unlock the screen even if you're all sweaty; it also alerts you if you leave your protective tabs open, so you don't forget to seal everything back up when you're done plugging (or unplugging) something in.

In this article: CAT, CATS50, IFA2014, Rugged, S50, Smartphone
All products recommended by Engadget are selected by our editorial team, independent of our parent company. Some of our stories include affiliate links. If you buy something through one of these links, we may earn an affiliate commission.