Cat's super-rugged B100 is pretty cool for a feature phone

iRiver B100 wants you to 'touch the supreme sound', pedants grumble 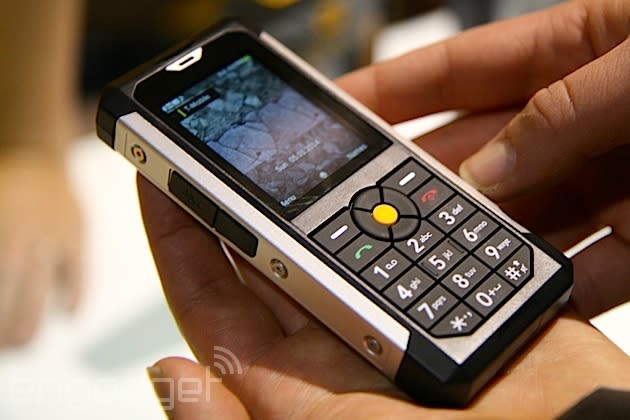 I know, I know, it's a feature phone. But still, pretty cool as far as these things go. Granted, though, when we played around with the Cat B100, we had to get ourselves back into that pre-smartphone mindset (a phone without a touchscreen? Whaaa?). Like its older sibling, the B15, the B100 is as rugged as you'd expect of a device bearing the Caterpillar branding and a black-and-yellow color scheme. The B100 feels solid, owing much to its metal sides. The phone can take up to a 1.8-meter drop, and thanks to covered ports, can survive being submerged in one meter of water for half an hour.

In place of the 15's touchscreen is a large-button keyboard, which you should theoretically be able to operate while wearing work gloves while on the job. On the rear is a three-megapixel camera and flash, along with a large speaker -- or you can just open up the headphone jack located on top of the phone. As for availability, well, we know it's coming to Germany and other parts of Europe this year. No word on if/when it'll be available here, though a rep assured us that more news would be forthcoming on that front later this year. In this article: b100, cat, cat b100, caterpillar, featurephone, hands-on, mobilepostcross, phone
All products recommended by Engadget are selected by our editorial team, independent of our parent company. Some of our stories include affiliate links. If you buy something through one of these links, we may earn an affiliate commission.