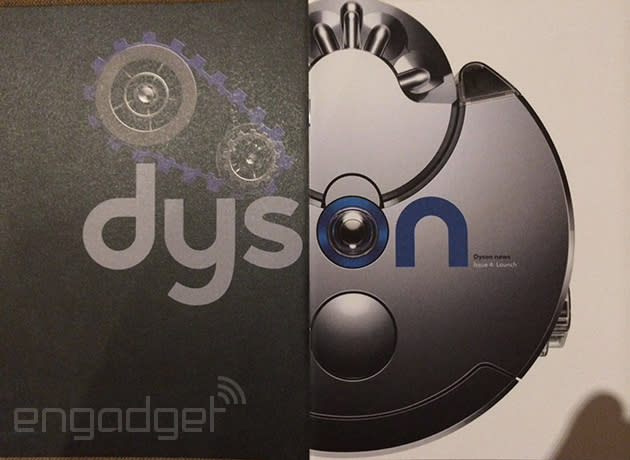 That robotic vacuum cleaner that Dyson teased a few days ago? It's arriving -- and soon it's here! Thanks to a kind tipster, we were able to get a quick look at the device called the Dyson 360 Eye, which will apparently be revealed in earnest later today. As the image above suggests, it's a similar shape to existing robot vacuums, but arrives equipped with a 360-degree camera. It can apparently wheel around vacuuming your house for 20 minutes, before it needs to get back to a vertically-mounted (extremely classy), glass and acrylic charging station. According to our source, it's a follow-up to a Dyson vacuum cleaner called the DC06 from a decade ago, which was never released as it carried a very hefty $16,500 price tag. The 360 Eye won't be exactly cheap either, we hear, but the tipster reckons it'll be a lot more affordable at around $1,650. They added that it will be available in Japan first, but will roam carpets and corridors in the US and the UK soon after. Expect to hear more later today.

In this article: 360eye, cyclone, dyson, leak, robot, RobotVacuum, vacuum
All products recommended by Engadget are selected by our editorial team, independent of our parent company. Some of our stories include affiliate links. If you buy something through one of these links, we may earn an affiliate commission.