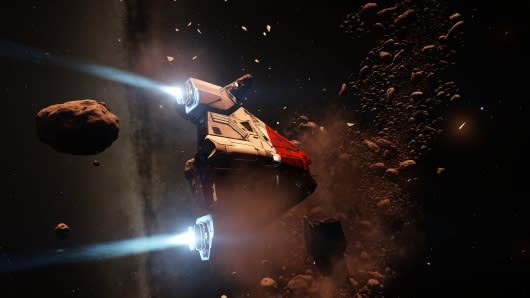 So what do you want to do in Elite: Dangerous? Do you want to get into space dogfights? Build up a trade empire? Or do you really just want to accelerate to high speeds, jump out into the unexplored portions of space, and start seeing what's there? The latest newsletter for the game discusses precisely that with the exploration mechanics. Just exploring in the broadest sense is fairly simple, but being the first person to visited an unseen system won't count as exploring a heretofore unexplored location.

To really explore a system, players need to determine how many major bodies there are in orbit around the star and scan the lot of them before returning home to tell about it. Having a full set of data and being the first to return with it will provide big rewards to the explorer, but if another ship comes across yours and it wants the prize of being the first to explore the system... let's just say there are no laws against loading weapons and opening fire.

In this article: claim, claims, dangerous, david-braben, discovery, elite, elite-dangerous, exploration, exploring, frontier, frontier-developments, game-mechanics, internet-spaceship, kickstarter, news, news-items, preview, previews, sandbox, sci-fi, space, spaceships
All products recommended by Engadget are selected by our editorial team, independent of our parent company. Some of our stories include affiliate links. If you buy something through one of these links, we may earn an affiliate commission.