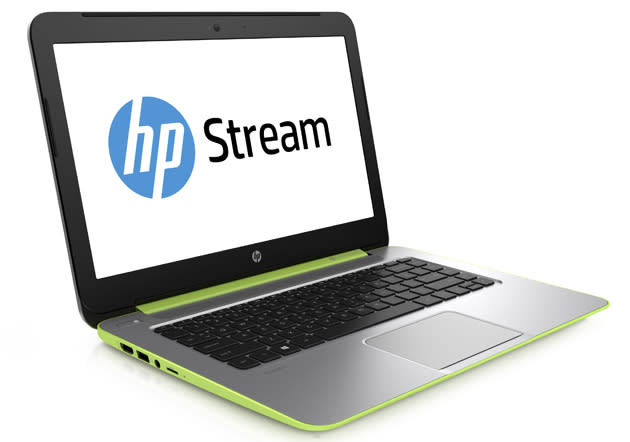 When we first saw leaks for the HP Stream, a $199 laptop primarily meant to be used online, like a Chromebook, we were pretty excited -- here was something as affordable as a Chrome OS device, but running Windows 8.1. It turns out, however, that although the Stream is indeed a real product, it's not as cheap as we all thought. HP just formally unveiled it, and it's actually going to start at $300, not $199, as Microsoft itself previously promised.

That disappointment aside -- a $199 Windows laptop would have been sweet -- the specs match up perfectly with the rumors. This is a 14-inch machine, with a 1,366 x 768 display, 2GB of RAM, 32GB of local storage and a low-powered AMD A4 Micro processor that allows for a fanless design. On the outside, it looks like HP's Android-powered SlateBook, with colorful accents, two USB ports (3.0 and 2.0), an HDMI socket and a microSD slot. Even the weight is basically the same, at 3.8 pounds. Similar to Chromebooks, which come with 100GB of Google Drive storage, the Stream will include 100GB of OneDrive space, free for two years.

The Stream ships later this month, on September 24th. Despite the higher-than-expected price, we still hope to check one out -- having more alternatives to Chromebooks is ultimately a good thing. Until then, what say you guys? Anyone out there buying? Sound off in the comments.

Update: An HP spokesperson says there will be more laptops in the Stream family, leaving open the possibility that one of them will cost closer to $199. So far, though, HP has only announced the Stream 14, which means details about any other devices remain unknown.

In this article: hp, hp stream, hpstream, stream
All products recommended by Engadget are selected by our editorial team, independent of our parent company. Some of our stories include affiliate links. If you buy something through one of these links, we may earn an affiliate commission.