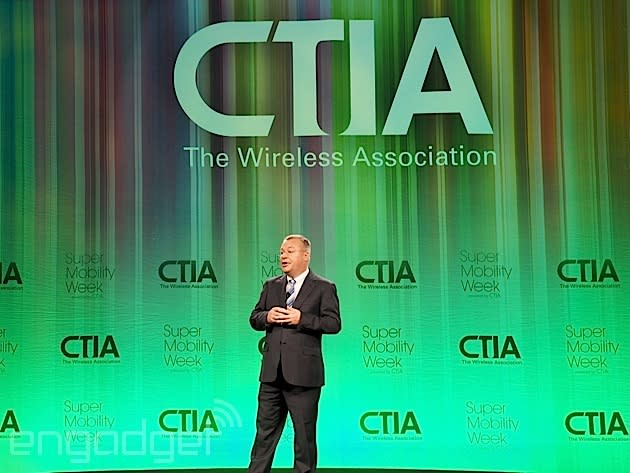 "Our new CEO is taking us through a transformational phase," said Stephen Elop of Satya Nadella, Microsoft's recently crowned leader, to a rapt crowd at CTIA earlier today. In a talk given during an afternoon keynote session, Elop wanted to convey to the audience of wireless industry press and professionals that Microsoft's not standing still in the face of innovation.

Elop, who's currently Microsoft's lead of Devices and Studios, plans to do so by zeroing in on what makes Microsoft unique. "At our core, Microsoft is a productivity and platform company," he said. And in a mobile-first and cloud-first world, this means reinventing and building new productivity experiences and platforms. "That's what we know best," Elop said, pointing out that Microsoft has a long history of helping individuals and city governments be successful and productive.

But it's not all work and no play. Sure, Microsoft has strength in enterprise, but that's simply insufficient in today's world. "Our work and personal lives are increasingly intertwined," Elop said, pointing out that more and more people don't separate work email from casual texts from colleagues. "It's incredibly important that we appeal to every person, not just work but at home ... a virtual business meeting and a meeting with your daughter should be done the same way. It should be simple; it should be Microsoft."

That, in essence, is the game plan behind all of Microsoft's products. From a unified cloud operating system, to an intelligent assistant like Cortana, to the Surface Pro 3 and of course to its line of Lumia phones, Elop wants Microsoft to be in every facet of your life. "Within my team, we have a clear mandate to help people do more. We want to showcase the finest digital life experiences ... It is only the totality of that experience that's most powerful." Indeed, at one point in the talk, Elop said that he wants to "put the entirety of the Microsoft experience in people's hands."

Of course, Microsoft has a ways to go. The Surface Pro 3 has recently landed in 25 more countries, and its sales numbers have yet to be proven. Windows Phone still lags behind iOS and Android. Still, the company's trying. It recently introduced an affordable Pureview camera in the form of the Lumia 830 (which will be available for AT&T) and Elop has said he's very proud of the Xbox One, which appears to be doing well.

"We must appeal to people in our lives," said Elop. "Innovation is anything but business as usual."

In this article: ctia, ctia2014, microsoft, stephenelop, supermobilityweek2014, windows
All products recommended by Engadget are selected by our editorial team, independent of our parent company. Some of our stories include affiliate links. If you buy something through one of these links, we may earn an affiliate commission.