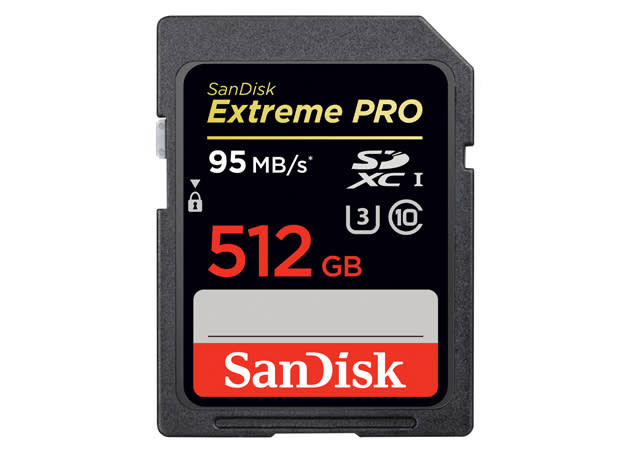 If you've been dabbling in 4K video recording, you probably know that most SD cards won't cut it; you'll be thankful if you have enough space for a wedding video, let alone a magnum opus. SanDisk may have a solution for that space problem in its new, extra-capacious 512GB Extreme Pro SDXC card. It's fast enough (95MB/s) to shoot interruption-free 4K, but also has more than enough storage for a day's worth of movies and high-speed photography. Capture 60Mbps video on Sony's AX100, for example, and you could theoretically keep going for almost 19 hours. You're going to pay dearly for all that headroom, though. The 512GB card sells for a whopping $800 -- unless video production is your bread and butter, you're probably better off "settling" for the Extreme Pro's 128GB or 256GB variants.

In this article: 4k, cameras, extremepro, memorycard, photokina2014, sandisk, sd, sdxc, storage
All products recommended by Engadget are selected by our editorial team, independent of our parent company. Some of our stories include affiliate links. If you buy something through one of these links, we may earn an affiliate commission.