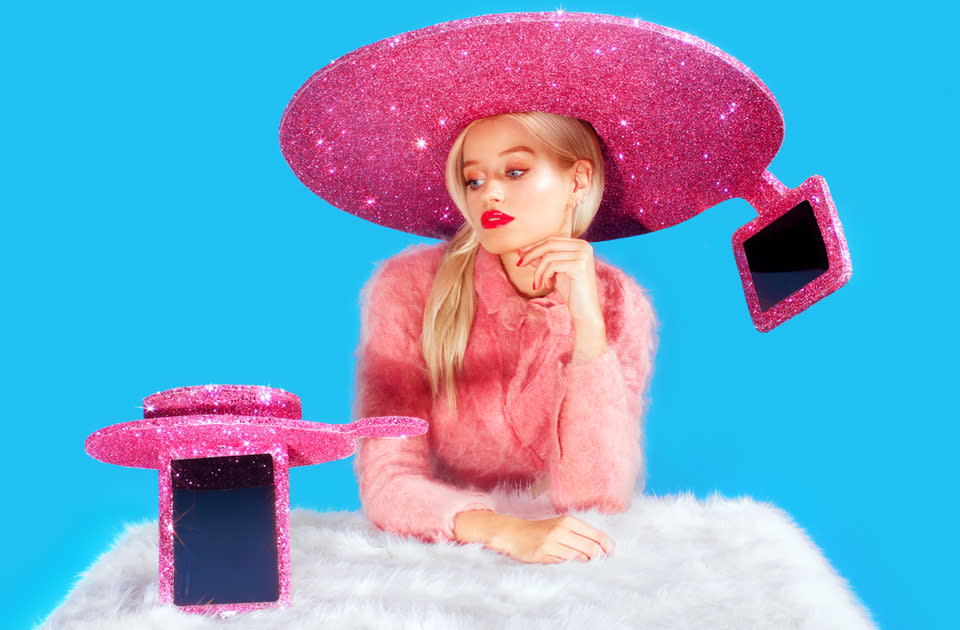 Once the Earth has burned and all that remains is humanity's high score floating on the arcade cabinet of the universe, aliens will wonder what the 2010-2020 generation contributed to culture. Googly-eyed academics will scrub through countless Twitter posts, news programs and songs to reveal that, for some reason, we were all obsessed with documenting our own faces with relentless abandon. Acer's contribution to our mutually assured destruction vanity is to team up with fashion designer Christian Cowan-Sanluis, who adapted his trademark pink glitter suit and visor hat into something more selfie-appropriate. The fashionable headwear now accommodates an Acer Iconia A-1 840 tablet, while the static drop-down visor has been ditched in favor of a sombrero peak that spins all the way around your head. Of course, this is nothing more than some attention grabbing for London Fashion Week, and it doesn't hurt for a traditional PC maker like Acer to borrow some much-needed glamor. The company is even allowing ordinary (okay, not that ordinary) members of the public to try on the Selfie-Hat if they make an appointment through the company's service. Except there's no details on who to speak to in order to get such an appointment, so presumably if you don't know already, you're clearly not fash enough, dahling, to warrant a go. At the same time, Cowan-Sanluis has also knocked up ten tablet cases that resemble the original, clad in the designer's now trademark sparkly pink. Meanwhile, a gargantuan snot beast from the planet Piscium B will read this story in horror, exclaiming that "most of them aren't even that good looking!"

In this article: acer, ChristianCowan-Sanluis, hat, Iconia A-1 840, LondonFashionWeek, Selfie
All products recommended by Engadget are selected by our editorial team, independent of our parent company. Some of our stories include affiliate links. If you buy something through one of these links, we may earn an affiliate commission.