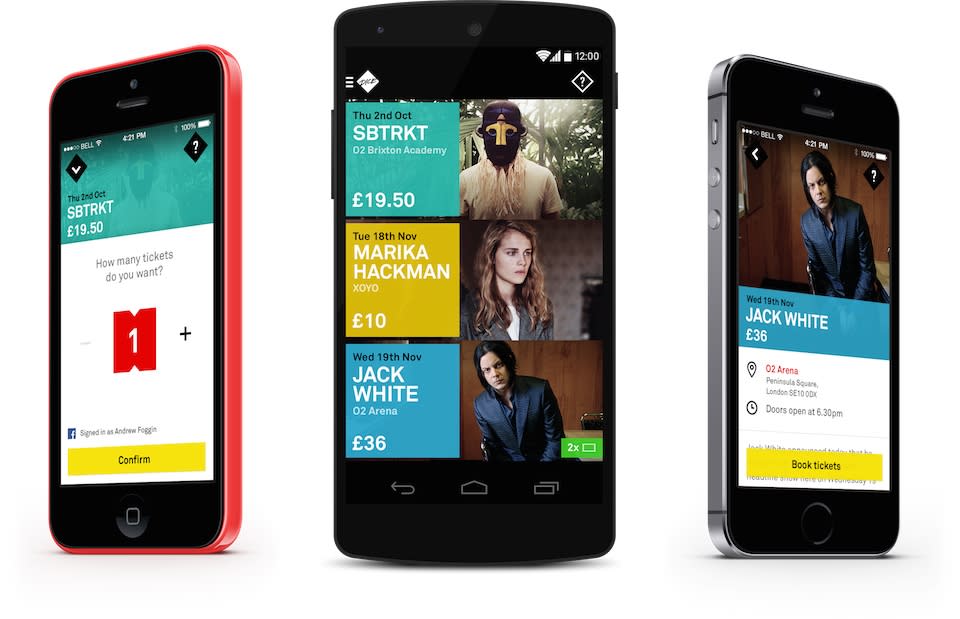 While you might own every single release your favourite band has put out, nothing beats going to see them live. If that's something you do regularly, you know that you'll not only have to fight it out with any number of like-minded fans to get your ticket, but you'll also have to run the gauntlet of booking via one of the major ticketing providers, which often includes submitting captchas, paying any number of booking fees or printing fees and running the risk that you won't come away with what you actually wanted.

Dice wants to change that. Launching today after 18 months of development, Dice is 100 percent mobile, cutting all of the crap that traditional ticket sellers normally try to force upon you. You pay the ticket price, and that's it. But how does it work? Once you've installed either the iOS or Android app, Dice will immediately load a full listing of gigs and concerts (over 100 at the time of launching) it has in its database. Currently, gigs are limited to London, but the company intends to embark on a global expansion in the coming months.

What you see is exactly what you'll pay, so when you do, you'll immediately be given an app-based e-ticket that will get you inside the venue with the minimum of fuss. If, for whatever reason, the gig has sold out or you came to the party too late, you can also choose to sit on a waiting list. While that might be the last thing you want to do, Dice has a very unique way of turning this to your advantage. Firstly, venues and promoters have access to ticket sales (but not personal information), allowing them to gauge whether there's enough demand to lay on a new tour date. Secondly, and this can't be understated, it allows anyone who has bought a ticket and suddenly realised they're not able to make the gig, to sell their ticket back to Dice, which in turn can then sell it to the first person in the waiting line. Those waiting will be alerted via text message or email, depending on their contact preference. It eliminates the need for secondary ticket sales, and it ensures music fans don't pay over the odds to see their favourite musicians perform.

The app is a joint-venture between Phil Hutcheon, a music industry veteran who's run record labels for over a decade, and ustwo, the insanely talented creative team behind smash hit puzzle game Monument Valley. Realising that 80 percent of people use a website to book tickets, they sought to create a mobile app that removed the friction from paying to see live acts. This is evident when you buy a ticket and you don't have to waste time filling in your details, completing captchas or race to complete the purchase within a set amount of time. "It gets the ticket in the hand of the fan as quickly as possible," says Hutcheon.

At launch, the majority of shows are for indie bands and musicians, but there are some big names there too. Jack White, Little Dragon, alt-j, Basement Jaxx, Bugged Out and Ministry of Sound are all present, filling arenas like the O2 and the Shepherds Bush Empire, but the Dice team also works hard to curate a list of more intimate gigs at local pubs and smaller venues to help users discover music they might never had heard before. It's an intimate way of working that benefits artists as they're able to get more people to come to their events, and venues are able to work closely with the team to allocate more tickets. Because there are no hidden fees or booking charges, Dice offers customers up to 30 percent off the price of a show from a rival service. In fact, the more you use it, the app will begin to learn your musical tastes, delivering more relevant suggestions as time moves on. The idea, after all, isn't to just sell you tickets for bands or musicians you've already seen, but to connect people with upcoming talent that could one day go on to do a global arena tour.

Hutcheon tells me that the Dice app you see today does exactly what it needs to do to launch, but that's it. With investment and guidance from Google Deepmind, Robbie Williams' management and many others, the company intends to make good on its promise to launch globally, but also introduce new features that help music fans get more from the app. This includes a new reservation feature that will let a user put aside a number of tickets for friends. The app will then email those people and invite them to pay for their own tickets, ensuring the organiser doesn't go alone, but also isn't left out of pocket (which has happened to this author in the past).

Future versions of the app may also include YouTube and Spotify playback, allowing users to get an idea of who they're looking to see before they buy their ticket. It already has the functionality to handle 70,000 tickets per minute (meaning it could sell out Wembley Stadium in just 60 seconds), ensuring that it can handle significant demand when it needs to. Dice believes it has the potential to become the Uber of the music space, which may mean it moves to a freemium model in the future, but from what we've seen, it's already off to a very good start.

In this article: android, app, concert, dice, ios, mobilepostcross, music, ticket, uk-feature, ustwo
All products recommended by Engadget are selected by our editorial team, independent of our parent company. Some of our stories include affiliate links. If you buy something through one of these links, we may earn an affiliate commission.