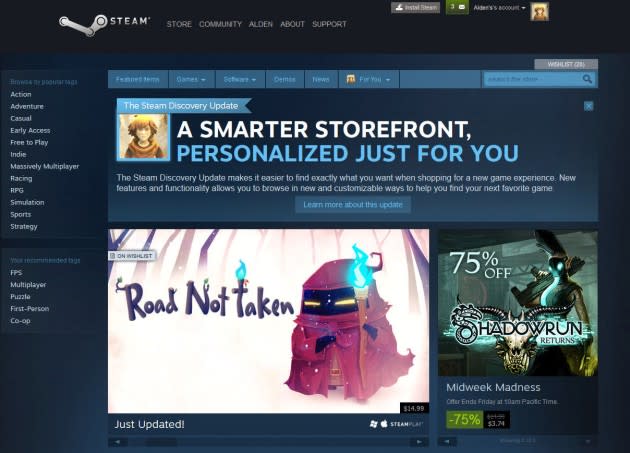 When Valve debuted game-recommendation tags not long ago, it was apparently a precursor to something much bigger. Today the PC game-sales juggernaut has revealed a new look for its store that aims to put games in front of you that you didn't even know you wanted. By utilizing the tags, your gaming history and a few other aspects, Valve has redesigned the homepage so that it'll apparently make finding games you're interested in a lot easier. The Discovery Queue gives you a chance to browse through suggested releases, wishlist them or skip updates on titles completely. Valve says that the list will refresh daily, giving you a chance to possibly find the next killer indie before anyone else.

Presumably these ratings, as well as the ability to follow "curators" that act as tastemakers for gaming, will go to further establish a taste profile (similar to what Netflix does). Oh, and as you can see in the image above, the app now sports a blue color scheme. Almost makes you want to buy something, no?

All Store changes on one handy page. Lots of stuff! http://t.co/bDpGnL370A

The new Steam Store is here. And yes, it's blue. Told you so. http://t.co/4YniHgR7Hh

In this article: blue, desktop, gaming, hd, hdpostcross, Linux, Mac, PcGaming, refresh, STEAM, valve, windows
All products recommended by Engadget are selected by our editorial team, independent of our parent company. Some of our stories include affiliate links. If you buy something through one of these links, we may earn an affiliate commission.