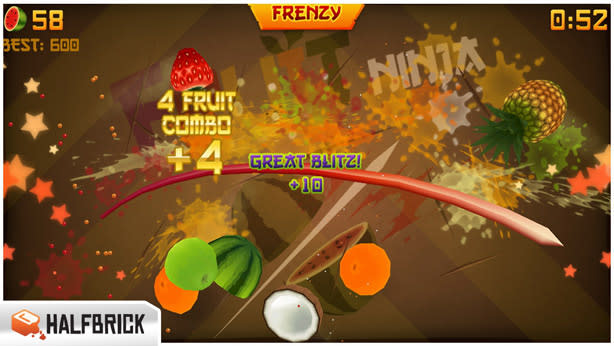 "The team has thrown away the tired menu and UI designs, ensuring the steps between playing, equipping new gear, and using social features are all streamlined," Halfbrick said in a recent statement. "Now, almost every item will have a unique effect on gameplay, which has effectively broken the score ceiling and added an exponential amount of depth and strategy to slicing."

The update allows players to pair unlockable Blades and Dojos for various game-altering effects, similar to the gameplay structure adopted by the studio's endless runner Jetpack Joyride. The new "Great Wave" dojo spawns large groups of fruit during each session, for instance, while the Autumn Blade summons a screen-clearing tornado after players slice a pineapple.

Fruit Ninja's update is slated to launch in October.

[Image: Halfbrick]
In this article: android, fruit-ninja, fruit-ninja-hd, halfbrick, ios, ipad, iphone, mobile, update
All products recommended by Engadget are selected by our editorial team, independent of our parent company. Some of our stories include affiliate links. If you buy something through one of these links, we may earn an affiliate commission.