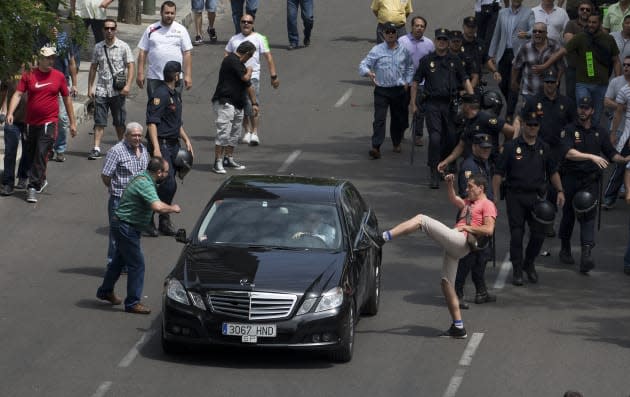 Just when you thought Uber's legal battle in Germany was settled once and for all, Bloomberg is now writing about the company having to deal with new challenges in that country. According to the report, Uber has been ordered to bring its UberPop and UberBlack services to a halt, yet again, in two of Germany's biggest cities, Berlin and Hamburg. Local authorities there argued that Uber clearly violates German laws, claiming the ridesharing firm doesn't have the appropriate license to operate legally, which was enough for courts in those cities to rule in favor of a ban. "The services violate multiple rules for transporting people that serve to protect customers," a spokesperson for the Berlin court told Bloomberg. "The ban serves to protect the viability and functioning of the taxi services, in which the public has an important interest."

The court's representative went on to say that the ban was "necessary to protect customers from dangers to life and limb, because their security doesn't seem to be guaranteed under the business model." In contrast, Uber drivers haven't had the easiest of times across Europe, having suffered attacks previously in places like France and Spain, where members of different taxi commissions haven't been very receptive of its offerings.

Update: In response to our inquiry about the situation, a spokesperson from Uber said "Uber is reviewing the court documents in detail before commenting on today's decision but will continue to comply with German law."

In this article: Berlin, Germany, Hamburg, ride-sharing, ridesharing, Uber, Uber ban
All products recommended by Engadget are selected by our editorial team, independent of our parent company. Some of our stories include affiliate links. If you buy something through one of these links, we may earn an affiliate commission.