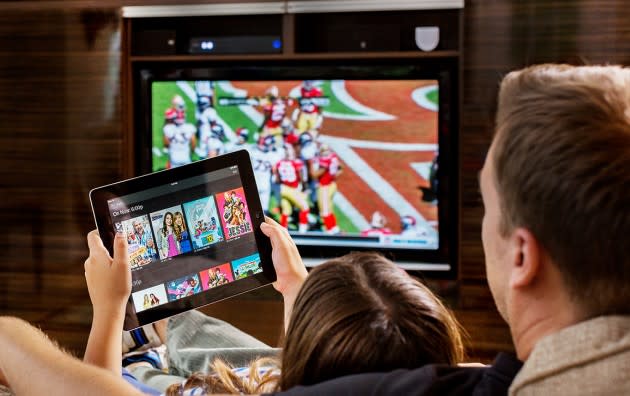 In the midst of attempting to gobble up its largest counterpart, battle Netflix on net neutrality and face down customer service scandals, Comcast is still slowly extending its new TV platform. The latest addition to its X1 setup is enhancing the cloud DVR feature that CEO Brian Roberts showed off at the beginning of the year. While the 500GB cloud DVR and in-home streaming are already a part of the system in several areas, in the Bay Area and Houston viewers can stream or download recordings to their mobile devices (iOS or Android, PCs can only stream) starting today. Inside the house, the X1 app fulfills Roberts promise of turning any mobile device into a television, with access to live TV streaming, recordings and video on-demand. Of course others like Sling and TiVo have been way ahead in bringing TV shows, live or recorded, to small screens, and providers like Dish Network, AT&T and DirecTV have also pushed multiscreen viewing including recordings and downloads. If you don't have one of those though, it's good to see Comcast rolling out the technology -- especially since more of us could end up under its umbrella if the merger goes through -- although we'll need to try it out to see how well it actually works in practice. The cable giant recently decommissioned / downsized its Netflix competitor Streampix, but the option of offline viewing could put X1 in places streams don't fit like airplanes or hotels with weak WiFi. Hopefully this is a sign of things picking up for X1. Next on the hitlist (after hiring a new exec to head up customer service) should be no more national outages, 4K, full streaming video access for devices like Roku, TiVo or the Xbox One and some useful apps for those new set-top boxes -- oh and just for laughs, we'll throw in that fabled Apple TV partnership, lower prices and HBO Go everywhere / for everyone.

In this article: cable, cabletv, cloud, clouddvr, comcast, download, dvr, hdpostcross, mobilepostcross, stream, x1, xfinity
All products recommended by Engadget are selected by our editorial team, independent of our parent company. Some of our stories include affiliate links. If you buy something through one of these links, we may earn an affiliate commission.