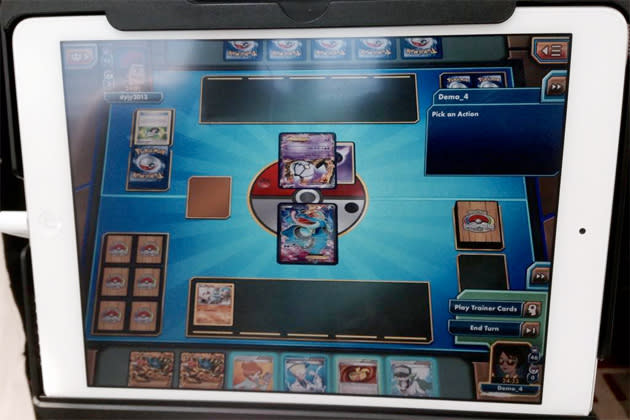 Remember that Pokémon iPad game that was teased not too long ago? Well, if the mere mention of it stoked a fire inside that made you want to abandon Blizzard's Hearthstone forever, Joystiq has spotted that the pocket monster trading card game is available on the App Store now. Pokémon TCG Online is free to download, but there are a few catches. As the name suggests, it requires an internet connection to play and your Apple-branded slate needs to be of the Retina-display variety -- your first- and second-gen iPads won't cut the mustard, according to iTunes. If you're already heavily invested in the game on OSX and Windows, Time points out that progress you've made in the last three years transfers over to the mobile version as well. Handy! And just like that, a Nintendo property is appearing somewhere other than on one of its own devices. Somewhere, an investor is probably smiling.

In this article: apple, gaming, hd, IOS, ipad, IpadMini, mobile, mobilepostcross, nintendo, Pokemon, PokemonTcgonline, RetinaDisplay
All products recommended by Engadget are selected by our editorial team, independent of our parent company. Some of our stories include affiliate links. If you buy something through one of these links, we may earn an affiliate commission.