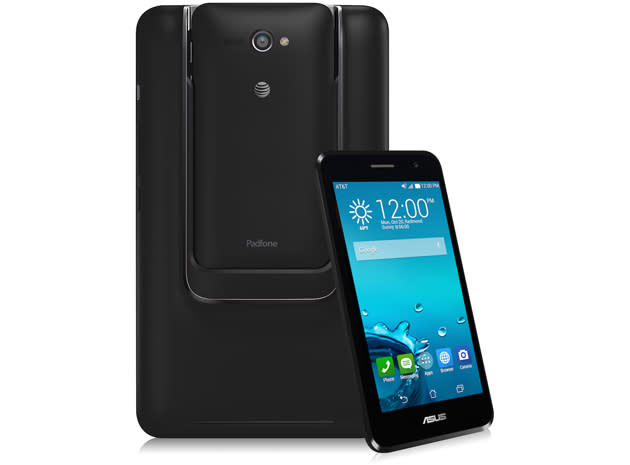 If you liked ASUS' PadFone X but weren't willing to pay that much for the combination of an Android smartphone with a tablet shell, AT&T might soon have what you're looking for. The carrier is bringing the PadFone X mini to the US on October 24th, when it will sell for $200 to GoPhone's prepaid customers. There's a lot of hardware here for the money, although it won't surprise you to hear that ASUS makes sacrifices to give you two devices for the price of one. The smartphone half is a bit better than the regular PadFone mini thanks to its larger 4.5-inch screen, but you're still looking at a dual-core Atom processor, a 5-megapixel rear camera and a 2-megapixel front shooter. You're also docking into a 7-inch tablet which houses little more than a front camera and an extra battery, so don't expect a night-and-day difference when you use the bigger screen. With that said, the PadFone X mini beats getting a budget smartphone by itself -- give it a look if you'd rather not buy a separate tablet.

In this article: android, asus, att, gophone, mobilepostcross, padfone, PadfoneX, padfonexmini, smartphone, tablet, zenui
All products recommended by Engadget are selected by our editorial team, independent of our parent company. Some of our stories include affiliate links. If you buy something through one of these links, we may earn an affiliate commission.