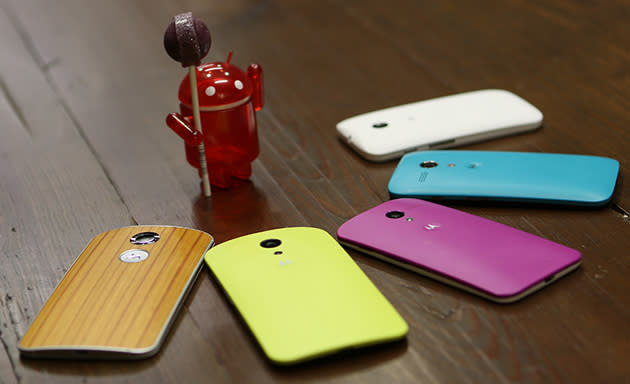 If you're a die-hard Android fan, you're probably champing at the bit waiting for that Lollipop upgrade -- when will you get it? Are you going to get it? Thankfully for you, a number of companies have already promised to upgrade some of their devices to this candy-flavored OS. Google's Nexus 4, 5, 7 and 10 models are naturally first in line, as are Android One and Google Play Edition hardware; its outgoing Motorola brand is equally on top of things with plans to patch the Moto E, G and X alongside Verizon's Droid Mini, Maxx and Ultra. HTC and OnePlus don't have full details, but they're both pledging to give their recent flagships a taste of Lollipop within 90 days of receiving finished code. NVIDIA and Sony, meanwhile, are being a bit vague. While they're respectively teasing plans to update the Shield Tablet and the Xperia Z series, they won't say exactly when just yet; Sony has committed to the "beginning of 2015" for Z2 and Z3 models.

As for other manufacturers? Well, don't hold your breath. LG tells TechRadar that it has nothing to say on "if / when" Lollipop will reach the G3, let alone older gear. The upgrade is likely coming, but the statement is far from reassuring. Mum's the word from Samsung as well, although leaks show that a Lollipopped version of TouchWiz is in the works. It's also reasonable to expect that relatively large brands like Acer, ASUS, Huawei and Xiaomi are on deck -- just don't be shocked if their older devices don't make the cut.

In this article: android, android5.0, google, googleplayedition, htc, lg, lollipop, mobilepostcross, motorola, nexus, nvidia, oneplus, samsung, shield, smartphone, sony, tablet, xperia
All products recommended by Engadget are selected by our editorial team, independent of our parent company. Some of our stories include affiliate links. If you buy something through one of these links, we may earn an affiliate commission.