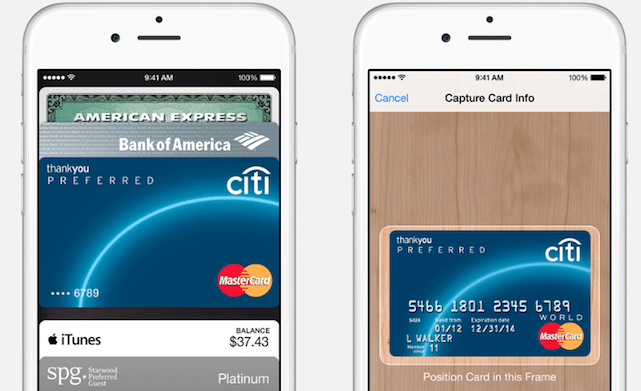 Monday October 20 is the first day Apple Pay will be available to use at select retailers across the U.S., but will you be ready to bust out your phone and make a purchase? Here's a handy walkthrough for making sure you're ready when you hit the register.

Step 1: Own a new iOS device

Sorry, but Apple Pay is only available on Apple's newest devices, meaning you'll need to have an iPhone 6 or 6 Plus to use the service in stores. The latest iPhone comes with a Near Field Communication (NFC) antenna, which allows them to communicate with the payment interface in stores.

Users with an iPad Air 2 or iPad Mini 3 can use Apple Pay to make purchases online, but they'll be out of luck when they hit their local Walgreens. Hopefully the next generation of iPads will get the NFC upgrade.

Of course Apple Pay is more than just NFC, otherwise every iOS user would be able to make payments online. These newer devices feature Apple's Secure Element chip which stores your private financial data and encrypts it for your protection. Older iPads lack this chip which is why you can't currently use the service with them.

Make sure you're device is updated. Go to Settings --> General --> Software Update to make sure you're using version 8.1. The update also brings back Camera Roll to your device so it's like getting two gifts at once.

Step 3: Open up Passbook and set up the right card

You'll need Passbook for Apple Pay. If you've never used Passbook, don't fret. The app is still on your phone. You may have previously moved it into a sub-folder marked "productivity" or something along those lines, but it is there. When you open the app it will ask you if you would like to use the card you already have on file for iTunes purchases or if you want to use a new card.

Of course there's a hitch. Apple Pay only works with Visa and Mastercard from certain banks, plus American Express, so if the card you have on file isn't with one of those services you'll need to input another card. Currently Apple pay works with cards issued by Bank of America, Capital One, Chase, City, and Wells Fargo. Barclays, Navy Federal Credit Union, PNC, USAA, and US Bank will be added in the near future.

When you enter a new card into the system Apple Pay will ask you to take a picture of the card within the app. Apple cross references the card with your bank to make sure it really is your card, but don't worry. When the card is displayed on your device the card number won't show up.

The reason Apple doesn't display your card number is simple; Apple doesn't actually store your credit card number. Apple Pay purchases are made using a device specific account number which is stored on your devices Secure Element chip. When you buy something with Apple Pay, Apple sends your bank an encrypted one-time use payment number and security code to make the purchases.

Apple won't be able to track what you buy or where you buy it, and cashiers won't see your name or credit card number when you make purchases anymore.

Once you've set up your card you're ready to go. Apple Pay isn't available across the board, but it's available at a number of leading retailers. At launch Bloomingdales, DuaneReade, Macy's, McDonalds, Staples, Subway, Walgreens, and Whole Foods are all accepting payments via the service. To make a payment simply wave your phone in front of the NFC terminal at checkout, swipe your finger over your iOS device's TouchID sensor, and bask in the joy of trying something new.

If you're on an iPad shopping is a little more complicated. At the moment you'll need to download each company's Apple app to make purchases with Apple Pay.

Given this is the service's launch day the process is remarkably easy. If you make any purchases today using Apple Pay let use know about your experience in the comments below.