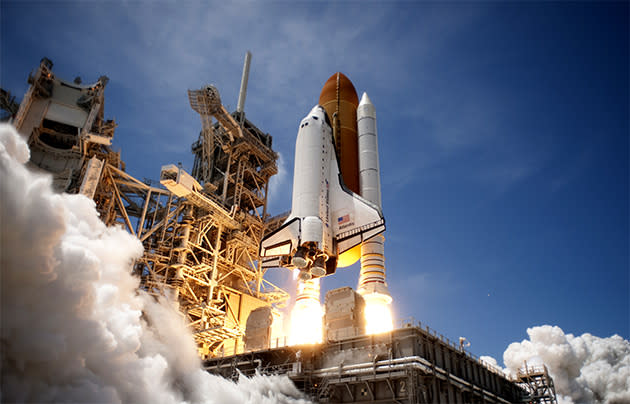 If you've ever wanted to cobble together a really wicked EDM track comprised mostly of sound bites from NASA's Mercury missions, well, now's your chance. Everyone's favorite beleaguered space agency has been posting a treasure trove of audio clips that span the space age to its SoundCloud account (just in time to post them in form of Twitter's new Audio Cards), and they're really worth a listen.

All of the old standbys -- Neil Armstrong's "One Small Step," JFK's "We choose the moon," Sputnik's lonesome beeping, Apollo 8's earnest Christmas greeting -- are present and accounted for. What's really neat are the bits from lesser-known chapters of the country's voyages into the cosmos, like the eerie radio emissions radiating from Saturn, and the sound of lightning crashing on Jupiter. And your author's personal favorite? A clip of Apollo 12 commander Pete Conrad remarking that spacecraft could use "a little more all weather testing"... after it was struck by lightning on its way into orbit. Houston's only response? A rather bemused "Amen." Those were the days, no?

In this article: apollo, audio, history, mercury, nasa, soundcloud, space, spaceshuttle
All products recommended by Engadget are selected by our editorial team, independent of our parent company. Some of our stories include affiliate links. If you buy something through one of these links, we may earn an affiliate commission.