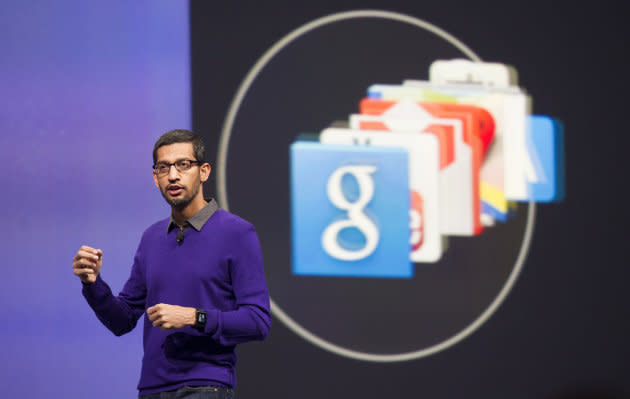 Well, we guess congratulations are in order. According to Re/code, Sundar Pichai, the senior vice president at Google who used to just be in charge of the Chrome, Android, and web apps teams now basically has control of almost every other Google product division of note. Search? Google+? Ads? Even the company's infrastructure? All of that has been apparently moved off of CEO Larry Page's plate and onto Pichai's -- not a huge surprise considering his heightened prominence within Mountain View over the past months. Pichai, a nine year Google veteran, was even rumored to be one of the leading choices for Microsoft's new CEO, though the role eventually went to longtime company insider Satya Nadella.

Anyway, that's a lot of power in one man's hands, especially considering that the advertising division Pichai inherited basically pays for all the other weird, amazing things Google gets to do. It's worth noting that not every Google product falls under Pichai's newly opened umbrella, though. There's YouTube, for one; that still remains under Susan Wojcicki's control, which she took over earlier this year. Oh, and all the really neat stuff -- Nest's growing internet-of-things team, the biotech innovations in the works at Calico, the moonshots under construction at Google X -- are all still firmly in Page's pocket. In fact, his love for the latter may be what caused this seismic leadership shift in the first place. Re/code notes that Page has expressed an interest in focusing on the "bigger picture" stuff that'll define what the Google of tomorrow will look like, lining up with earlier reports that he's been tapping internal talent to figure out what big, world-changing problems Google should really be trying to fix.

In this article: android, chrome, google, larry page, larrypage, sundar pichai, sundarpichai, svp
All products recommended by Engadget are selected by our editorial team, independent of our parent company. Some of our stories include affiliate links. If you buy something through one of these links, we may earn an affiliate commission.