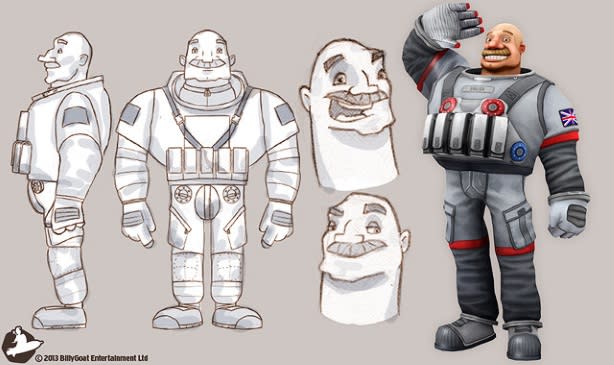 Her Majesty's SPIFFING from BillyGoat Entertainment failed to meet its Kickstarter goal last November, but the "quintessentially British" adventure game about Captain Frank Lee English's quest to expand the British empire to the stars is back with a vengeance. If "a vengeance" is what you call a new Kickstarter campaign.

"We're so passionate about bringing our jovial space-themed adventure game to the world that we're willing to endure what could of course be nothing more than another humiliating and disappointing experience for everyone involved, not unlike my wedding evening," BillyGoat studio director Will Barr admits in the new pitch video, which you can view after the break.

Neither the amount of money BillyGoat is seeking - £30,000 - nor the scope of the game has changed since the last attempt at crowdfunding, but there is a playable demo this time around, so you can get a better idea of just what you're backing. You can download it and see the various backer rewards via the new HM SPIFFING Kickstarter page.

BillyGoat's first attempt at crowdfunding HM SPIFFING ended with just shy of £12,000 raised from 338 backers. So far, the new campaign has raised a smidgen more than £11,000 from 329 backers. It has 27 days left to secure the remaining money. If it succeeds, the first episode of HM SPIFFING will release in the second half of 2015 on PC, Mac and Linux.

[Image: BillyGoat Entertainment]
In this article: billygoat-entertainment, british, her-majestys-spiffing, kickstarter, mac, pc
All products recommended by Engadget are selected by our editorial team, independent of our parent company. Some of our stories include affiliate links. If you buy something through one of these links, we may earn an affiliate commission.