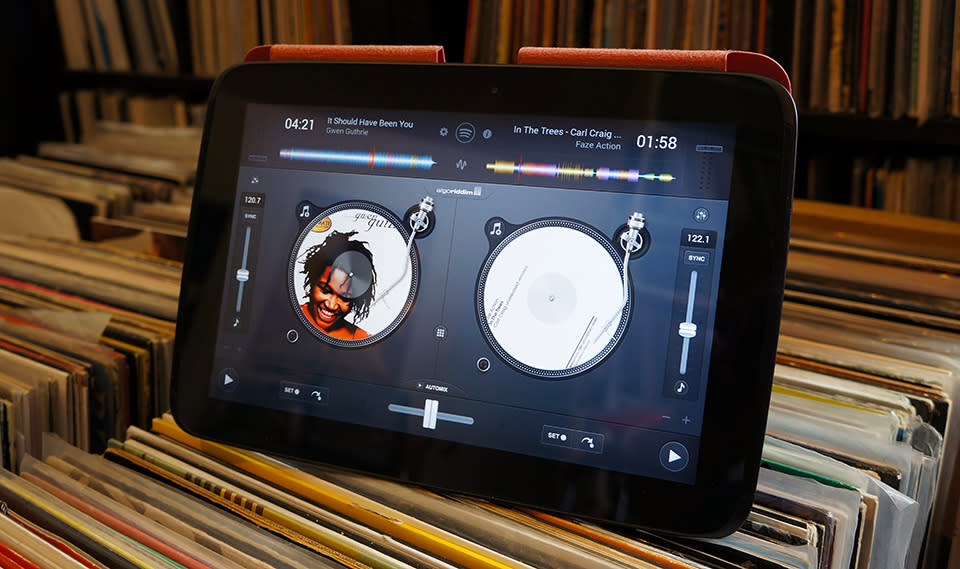 Algoriddim's Djay app has come a long way since its Mac-only beginnings in 2006, but after years of Apple exclusivity, Android users are finally welcome to join the party. Djay 2, the current version of the award-winning mobile mixing platform, has finally been ported over to Android (for phones and tablets runing 4.1 or higher) and is available today on Google Play and Amazon's Appstore for $2.99. Those familiar with the iOS version will find that little has changed after making the jump across the aisle. The app still gives you hands-on scratching and cueing, HD waveforms, Automix, in-app recording, pitch adjustment and on-the-fly effects for the full DJ experience. Spotify integration, which launched last May, is included to give premium account users instant access to its cloud-based library of tunes. And with Spotify's Match feature, DJs can get intelligent recommendations on what to play next. The app also dips directly into Play Music to let you select from your own locally stored audio files. We took the app for a quick test drive and found that it's a solid interface, but DJs looking to use MIDI controllers like the Reloop Beatpad for Djay will need a few more cables than their iOS counterparts to get the job done. Join us in the gallery below for a quick look at this new Android version of Djay 2. 17
In this article: algoriddim, dj app, dj mix, dj mixer, dj software, djay 2, reloop beatpad
All products recommended by Engadget are selected by our editorial team, independent of our parent company. Some of our stories include affiliate links. If you buy something through one of these links, we may earn an affiliate commission.