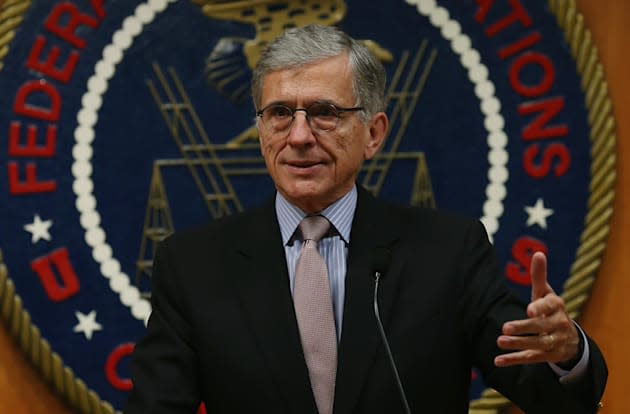 Right now internet services don't always have the opportunity to show the same content as traditional TV, but the FCC might be about to change that. Chairman Tom Wheeler described in his blog post "Tech Transitions, Video, and the Future" the "first step" to open cable programs and local TV to internet services, by giving them the same classification that cable and satellite providers have. That wouldn't apply to Netflix or Amazon (as they currently exist), but anyone streaming live TV channels over the internet -- like Sony, Verizon and Dish are planning, Intel tried before selling to Verizon, and Apple's TV project has been rumored to include -- would be covered.

Wheeler notes that a similar move in 1992 helped competition from satellite TV companies flourish, and sees the same potential for internet providers. Another company stuck in the current hole between being too much like a cable provider and not enough like one is Aereo, and its CEO Chet Kanojia said "By clarifying these rules, the FCC is taking a real and meaningful step forward for competition in the video market." Until now, owning a delivery method has been required for a company to be classified as a "multichannel video programming distributor," but Wheeler is asking the commission to create rules to cut that out. He also says changing the rules would make sure cable systems remain regulated as able, even if they switch to all-IP delivery, as some have been rumored to do.

He also claims it will let internet-based providers offer smaller channel bundles than what currently exists, giving customers more choices, and encourage the creation of broadband competitors that don't feel the need to bundle TV service. It will take some time to see how much, if any, of this comes true, but in the future companies like Apple, Google and Microsoft could jump in to compete with Comcast and its ilk right away, offering customers a way to switch providers without losing access to the stuff they want to watch.

In this article: aereo, apple, cable, fcc, google, hdpostcross, iptv, mvpd, ott, rulemaking, TomWheeler
All products recommended by Engadget are selected by our editorial team, independent of our parent company. Some of our stories include affiliate links. If you buy something through one of these links, we may earn an affiliate commission.