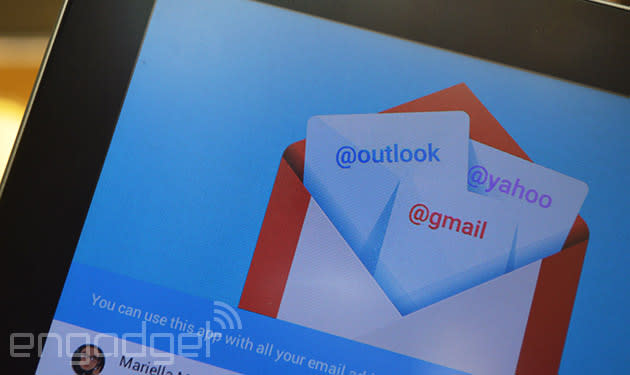 The new version of Gmail for Android is slated to make its way to Google Play in the near future, but if you cannot wait to use it, you can download the APK right now and load it up. You'll notice some major changes the moment you launch it, since it'll ask what kind of email addresses you'd like to add: version 5 works not only with Gmail addresses, but also with Outlook, Yahoo and any IMAP- or POP-based email accounts. To choose the inbox you want to check, simply tap one of your accounts on the left-hand menu. Also, it comes with a Material Design interface makeover (there's a lot more red now) and a thread email system similar to what you get through Inbox. We can't say which Android flavors it's compatible with exactly, but we've installed it on an Ice Cream Sandwich tablet, so it'll likely work with all newer platforms. To find out for yourself, or to take a break from Google's busy Inbox app, head over to Android Police to download the file.

Update (11/3): Google has officially announced the update, confirming it's rolling out now with support for Android 4.0+ devices. Want to take a look before making the switch? There's a video preview embedded after the break. In this article: android, apk, app, email, exchange, gmail, google, mobilepostcross, video
All products recommended by Engadget are selected by our editorial team, independent of our parent company. Some of our stories include affiliate links. If you buy something through one of these links, we may earn an affiliate commission.