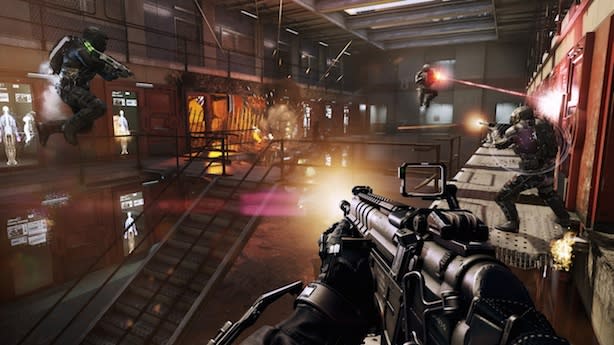 As a leak suggested earlier this week, zombies will gather once more to crowd around soldiers in Call of Duty: Advanced Warfare, according to a press release from GameStop. The mode will be "part of" Advanced Warfare's season pass, a $49.99 purchase that includes four packs of multiplayer maps as well as the bonus Atlas Gorge map.

For those who purchase the Day Zero Edition of Advanced Warfare, double XP will be granted for the entirety of Monday, November 3, the game's launch day for those who pre-order. Early buyers will also get the "Advanced Arsenal bullet brass exoskeleton and EM1 Quantum directed energy weapon, plus the AK-12G Assault Rifle and Crossbow-B2 custom weapons."

If you were planning on upgrading to a PS4 for Advanced Warfare's release, GameStop is offering $125 in store credit from today until November 9 in exchange of a PS3 (20 GB or higher) or an Xbox 360 (250 GB or higher) traded toward the purchase of a PS4. If you purchase a PS4 along with a matching copy of Advanced Warfare, GameStop will also throw in a year of PlayStation Plus for free. If an Xbox One is more your speed, you might to consider the recently-announced holiday bundles.

GameStop's press release does not give a sense of when season pass holders can expect to fend off the undead. Advanced Warfare's leading piece of DLC, the Havok map pack, is due to reach Xbox One first in January, with arrivals on other platforms following.

Update: An Activision representative has clarified that the zombies mode is part of the downloadable content map packs and does not require the purchase of the full season pass. The map packs containing zombies will be available a la carte.
[Image: Activision]
Show full PR text
Breaking News for Call of Duty Fans – Zombies are Back!

For customers who have been wanting to experience the next-generation installment of Call of Duty, but are a little short of money – don't fret. GameStop is providing customers unique forms of currency to help make the upgrade more affordable.

Stop by your local GameStop tonight to enjoy all the activities planned as part of the Call of Duty: Advanced Warfare midnight launch, and watch out for the attack of the zombies.
In this article: call-of-duty, call-of-duty-advanced-warfare, dlc, microsoft, playstation, ps3, ps4, season-pass, xbox, xbox-one, zombies
All products recommended by Engadget are selected by our editorial team, independent of our parent company. Some of our stories include affiliate links. If you buy something through one of these links, we may earn an affiliate commission.